Advent plays a big part in German Christmas celebrations.  Several different types of Advent calendars are used in German homes.  As well as the traditional one made of card that are used in many countries, there are ones made out of a wreath of Fir tree branches with 24 decorated boxes or bags hanging from it.  Each box or bag has a little present in it (sorry, we cannot manage that this year!).  Another type is called a ‘Advent Kranz’ and is a ring of fir branches that has four candles on it.  This is like the Advent candles that are sometimes used in Churches.  One candle is lit at the beginning of each week in Advent.

Christmas Trees are very important in Germany.  They were first used in Germany during the late Middle Ages.  If there are young children in the house, the trees are usually secretly decorated by the mother of the family.  The Christmas tree was traditionally brought into the house on Christmas Eve.  In some parts of Germany, during the evening, the family would read the Bible and sing Christmas songs such as O Tannenbaum, Ihr Kinderlein Kommet and Stille Nacht (Silent Night).  You would recognise the tune for O Tannenbaum – it has been pinched for We’ll keep the red flag flying!  Keep visiting here – there will be some carols coming!

Another tradition is the Sternsinger (or star singers) who go from house to house, sing a song and collect money for charity (this is a predominantly Catholic tradition). The singers are normally four children, three who dress up like the Wise men and one carries a star on a stick as a symbol for the Star of Bethlehem. When they’re finished singing, they write a signature with chalk over the door of the house. 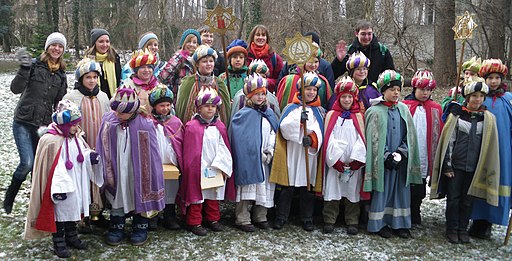 The Germans also have a strange Christmas tradition which is to watch a short British comedy made in 1962 called Dinner for One.  It’s long since forgotten here but the Germans love it and literally watch it every year, it just suits their slapstick sense of humour – it is very funny !