The Local History Group meets monthly on the first Thursday at 10.30.  Our group is led by David Temple, and he may be contacted at 01984 640170, or by email at localhistory@minehead-district-u3a.org.uk.

We are meeting online, using Zoom. Since our meetings are attracting well over 20 participants, it is unlikely that we will be able to remain sufficiently socially distanced in Townsend House for face-to-face encounters.  As always, the convenor is keen to hear from any members willing to offer a short talk at future meetings on any aspect of the history of this area.

Please remember to check the Calendar in case of any late changes to schedule.

July In response to many requests, we are at last meeting face-to-face next month on Thursday 7th July.   The venue is Carhampton Recreation Hall, which is on the A39 and has a large car park.  We shall meet between 10.00 and 12.00 to chat and seek a way forward for the group, since I feel it is time I took a back seat.  Hopefully I will be able to get the small Carhampton Museum open during that time. David

June  There was no meeting in May, so on Thursday 2nd June, Ron Blundell gave an excellent talk on scouting in West Somerset to a slightly smaller zoom audience on the Thursday of the Jubilee Holiday.  This is now recorded and available on the website here.

April  The group met by Zoom once again on Thursday 7th April, with Cherrie’s excellent talk ‘Mining, Murder, and Mystery’, which expanded on her talk at the previous coffee morning.  Despite the poor internet connection from our home in Chapel Cleeve, due to the windy conditions, I have managed to record and edit her talk.  This is available with earlier talks here, within the member’s only area.

There will be no meeting on the first Thursday of May and the 2nd of June is the start of the Queen’s Platinum Jubilee weekend.  Hence I will need to find a new date.  I also hope to start outside visits from May.  Members of the group will be informed by e-mail.

March   The March Zoom meeting on 3rd March was very successful, with Alison presenting her research on Williton Workhouse, illustrated with many photos she took of the building soon after its modern conversion. It was sad to hear of some families’ lives in 1881. David followed with a description of the Mineral line which ran South from the West Quay in Watchet.  Due to time constraints  this presentation got as far as Kentford where trials of a train control system were held in 1912, with a large audience watching.  This will be continued in due course.

We are planning a walk through Williton following an earlier talk.  This will start and finish at the church.

February  At our meeting on 3rd February, Ron Blundell explained the history of the telephone exchanges in Minehead.  We take telephones for granted, but they were essential to the development of the town throughout the 20th century and Ron played a crucial role in this  for two decades. This was followed by Barbara Hoffbauer’s talk on shantymen.  These Zoom presentations were recorded and are available to logged in members at On the Shoulders of Giants and Some West Somerset Shantymen.

January  The Local History Group took a break in January.  Despite the occasional gremlins, I have taken the decision to continue with Zoom meetings, due to the worsening Covid numbers.

December.  Di Martin gave a Zoom presentation on the history of the island of Steep Holm, which was fortified in the 1850’s as part of Palmerston’s follies and again during the second World War.

November.  Over 30 u3a members welcomed Dr Leonard Baker from Exeter University to the Zoom meeting on Thursday 4th November.  He spoke to the title ‘A Landscape Transformed: The Reclamation of Exmoor Forest During the 19th Century‘.  Leonard is the post-doctoral researcher working with Exmoor National Park as part of the Knight papers project, which involves a number of u3a members as well.  Leonard was able to put the work John Knight undertook into the social context of the time, immediately in the aftermath of the Napoleonic war.  Knight’s efforts were well illustrated with maps and images of Exmoor.  A lively discussion followed, which also included Catherine Dove who leads the project for the Park Authority.  A recording of his talk is now available in the members’ section of the web-site (follow the link just above).

We will continue using zoom for our December meeting on Thursday 2nd, with Di Martin giving a history of the island of Steep Holm, which was fortified in the 1850’s as part of Palmerston’s follies and again during the second World War.

October.   David started work a couple of months ago on a small project around a set of postcard sized photos that he and Cherrie obtained  showing period scenes of Williton.  He has now identified all but one of the locations and has taken current images of the same scene.  So David will presented a Williton ‘then & now’ Powerpoint.

David: “What I hope to achieve is some discussion, because I have no background knowledge of Williton other than the little blue book ‘Old Watchet and Williton‘, by A.L. Wedlake.    So I hope some of you can remember when buildings were replaced or demolished etc.  I also want to demonstrate that it is easy to take the first steps in such a project and hopefully encourage others to realise that they can offer the group something.  I am always happy to assist with the AV side, if required. “

September.   Barbara Hoffbauer  talked on the theme ‘Upstairs/Downstairs’, highlighting the practice among wealthy people in the 19th century of not hiring local people as their live-in servants, and giving examples from four or five mansions in the area.  The meeting also heard Jan Lowy discussing the issue of smuggling along Exmoor’s coast in days long gone.

July.  Catherine Knight’s Watchet history walk is going ahead on the morning of Thursday 8 July. – all places booked.

June.   Peter Dean spoke about George Fownes Luttrell and his influence on the development of Minehead as a classy tourist resort in the second half of the 19th century.   He asked the question – who of us would be resident in Minehead if it were not for the work he had done in his lifetime?   David followed up Peter’s mention of the pier, with the latest images of the new pier model, which is now in the museum. 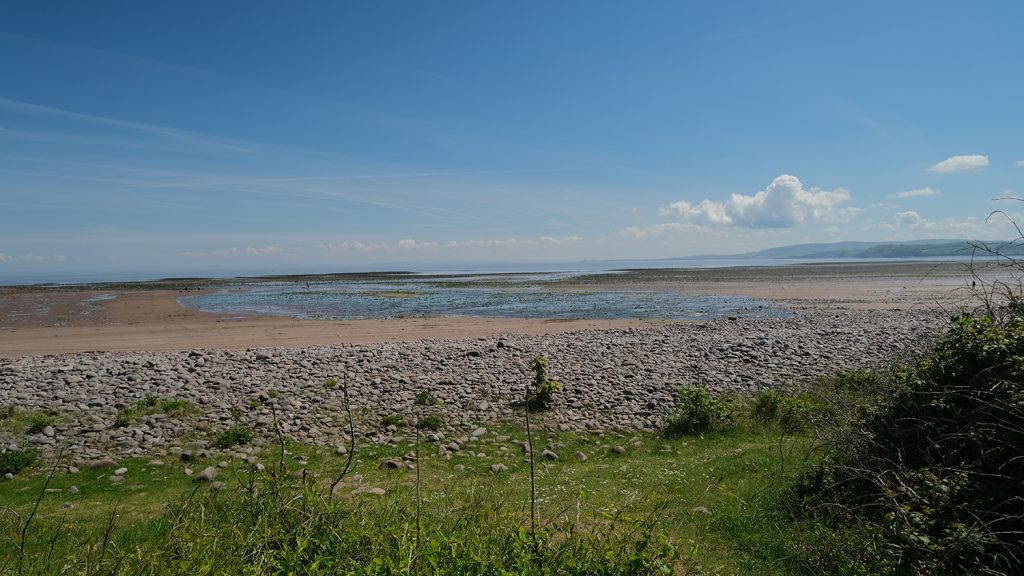 May   Another successful Zoom session was held on Thursday 6th May, with over 25 participants to hear Cherrie’s comprehensive talk on Arthur C. Clarke.  We had hoped that there would have been a friend of the current Clarke family, who still farm at Ballifants, in the audience, but this was not possible in the end.  The presentation is recorded and available to members who are registered on this website and logged in: Arthur C. Clarke: Minehead to the Stars / by Cherrie Temple

April   Another very successful meeting was held by Zoom on April Fools’ Day, with nearly 50 in the audience.  Barbara Hoffbauer regaled us with stories of some of the people who lived, owned or rented property in Dunster, from the Middle Ages until more recent times.  As usual her account was well-illustrated and showed the depth of her knowledge and research of the history of Dunster.   With the slight lifting of restrictions, she will be offering to take parties of 5 round Dunster Hawn to see where the medieval harbour might have been.  Please contact David if you are interested in participating.

March   The group seems to have really taken to Zoom now, I’m pleased to report.  Local History held an enjoyable and informative meeting via zoom on Thursday 4th March.  About 35 members were enthralled by Anne Stamford’s story of Dunster during the Civil War period, 1643-46.   The narrative was well illustrated with images taken by her niece, who is an enthusiastic Civil War re-enactor.  A video recording of the Zoom presentation is also available for registered and logged in members only.

History was then brought back into living memory, when Jan Lowy presented some images of Minehead showing the effects of the great storm of 1996, which led to the reconstruction of the sea wall.  The discussion which followed linked both eras, with questions about the massive surge of seawater back in 1607 – an item for someone to follow up and present to the group perhaps?

February    We enjoyed a presentation from Barbara Hoffbauer about her very thorough search for Dunster’s medieval port.

January  The first session of the year (15th January)  was an update on the Knight Family Archive Transcription Project (see our Research/Shared Learning Project pages).  An excellent mixture of talk and visuals of Simonsbath was enjoyed by over 30 members.  We would have been very cramped had we held the meeting at Townsend House, so the chance for some of us to meet online was a positive advantage.   A pdf version of the presentations is available through the Presentations page; and a video recording of the Zoom presentation is also available for registered and logged in members only.

December    The final meet of the year was on Thursday 3 December when Jan Lowy presented on early transport on Exmoor, i.e. the development of the road system.  This presentation (in pdf format) can be found via a link on this page (see right hand side or the bottom of the page, depending on how your device handles web pages).

November    Unfortunately, Catherine Knight‘s walk in Watchet was scheduled for the first day of the new lockdown, so it was cancelled.  It will be offered again in the New Year, COVID permitting. 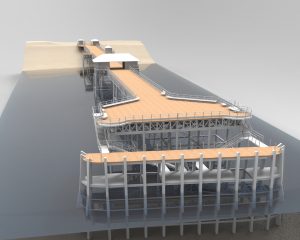 David Temple presented (via Zoom) the latest information on Minehead Pier, resulting from work being done by the Museum to create a model of the pier to celebrate 120 years since it opened in 1901.  David: I have found the plans in the Heritage Centre, which form the basis for some excellent 3D computer images of the pier, prior to actual model building.  There will be an interesting little-known twist in the story.

October   Visits to outside venues being allowed, a first outing was a visit to the Somerset & Dorset Railway Museum at Washford Station.   This may well be the last chance to see this museum, since it will be relocating outside the county next year.    David Temple

Images from the visit to the Somerset & Dorset Railway Museum at Washford Station.  Click the image for a larger view: 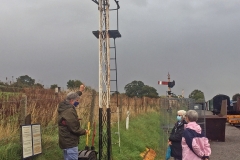 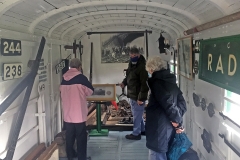 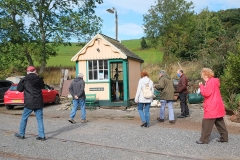 The emphasis is on shared learning, with group members encouraged to research topics and then talk to the rest of the group about them.  Occasionally we invite outside speakers to talk to us and some of our meetings take the form of outings.  Details of meetings appear in the monthly U3A newsletter, the Calendar,  and also here on the Local History group’s main page.

Examples of some group activities

In the last year or so we’ve visited the Exmoor Society in Dulverton, where we had a tour of the building and a talk from the archivist; we also visited Chapel Cleeve Manor, where we enjoyed a tour of the ground-floor rooms and a very delicious tea.  We have had guided walks in Selworthy, Allerford and Watchet.  We’ve also had a number of presentations from group members at Townsend House.  Some members of the group have worked on Shared Learning Projects (SLPs) in collaboration with Minehead Museum.  Some members of the group worked on the 2018 season’s SLP on the theme of travel, which was entitled Minehead on the Move.  This, too, was the theme of our Special Interest Day in March 2018.

Local history 1 (as was)