Please note this group has been formed into Local History.   This section deals with older Local History 1 activities prior to June 2020

Next year, 2021, will be exactly 120 years since Minehead’s pier was first opened to the public.  Minehead Museum is planning a special display, which was boosted last month by the unexpected discovery of one of the entrance gates to the pier during work to clear the harbour access.  If funding can be found, the museum trustees hope to commission a model of the pier to illustrate how the gates would have looked in their prime.  While the museum has several photos of the pier, few show detail of the entrance.  If anyone has any relevant information, recollections or photos to share, please get in touch with me.  The wooden decking was removed in 1940 at the orders of the military, but the metalwork was not dismantled until two years later.  I have been told that it was taken to Newport for storage and was still there some 20 years ago.  Can anyone confirm that?   David Temple 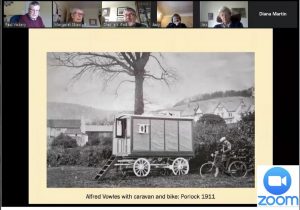 In April 2020, Margaret Shaw led two Zoom meetings for the Group on the amazing life and work of Alfred Vowles.  This worked well as Margaret was able to ‘share screen’ with the attenders so that everyone could see the interesting photographs that Alfred took of life on Exmoor in the early twentieth century.

The proposed guided walk through Minehead with Jill Merer did not take place on Friday 17th April.  Once the restrictions are lifted sufficiently for small groups to gather outside, we will arrange a new date with Jill.

If anyone has any other suggestions for keeping the group together during these strange times, do please let me know. Someone should perhaps be writing an account of Minehead under the 2020 lock down for future generations?

The first meeting in our new monthly slot, the third Friday afternoon of the month saw Cherrie Temple give a presentation on some of her findings about the old Minehead pier and the paddle steamers that plied their trade here.  After tea, Di Martin held a picture quiz to test our knowledge of some of our local landmarks.  Sadly, there were NO prizes, but it was fun and thought provoking!

As Alan has got busier with West Somerset Railway duties, he is standing down as joint convenor.  David will continue as group convenor and has gratefully accepted the offer of support in this role from Babs Nye, who’s a comparatively new member of the group.  Thank you, Babs!  Any group member who would be willing to prepare a talk or contribute in any other way to the work of the group is invited to contact David.

Despite the rather damp conditions on the afternoon of our October meeting, 16 U3A members enjoyed the tour of Bossington led by the knowledgeable Ros Lawton.  Ten of us joined her afterwards at Kitnors Tea Rooms, which Ros told us was originally a medieval hall house.  Cherrie Temple’s photo shows some of the group studying maps of the village before setting off with Ros.

At a successful meeting in Townsend House in August, Paul Vickery presented his initial findings on the village of Washford.  Despite the lack of published books on the village, Paul had discovered a wealth of interesting information from other sources – so much, in fact, that we look forward to ‘Part 2’ at a future group meeting.

At our meeting in June we welcomed Eve Bickerton, archivist with Somerset Heritage Centre, who gave us a fascinating and enthusiastic talk about how to use a combination of historical maps and modern technology to discover more of our local history.  Eve demonstrated the user-friendly ‘Know Your Place’ (KYP) website, using local examples to inspire members to use it for themselves and also to contribute more information to the website.  Then Catherine Knight showed us how she’d used the maps on KYP to add to her research into the coastguard houses in Watchet.

In May, we visited Dovery Manor Museum in Porlock, where we heard some of the history of the Cape House, a thatched cottage in the centre of the village.  The Cape House – actually three separate properties – has a long, interesting history and Rosemary Gray told us something of the research that forms the basis of the museum’s 2019 exhibition.

There was no April meeting, but at our March meeting Di Martin gave an entertaining talk on Exmoor at war.  After tea, Catherine Knight gave the second part of her talk on Daws Castle, presenting some of the archaeological maps from a 1986 report on the site by the Somerset Archaeological and Natural History Society (SANHS).

At our meeting in February, David Temple looked at the development of businesses in Friday Street, Minehead, and Catherine Knight talked to us about Daws Castle, Watchet.

Gallery of photos of our previous trips 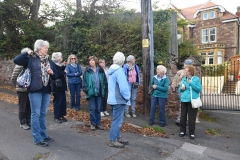 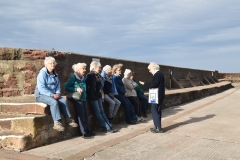 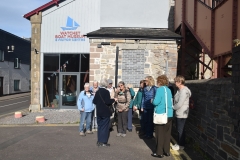 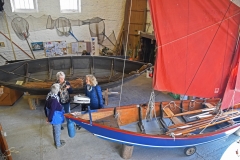 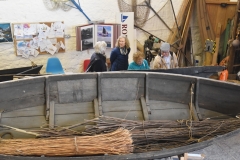 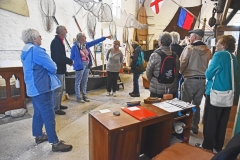 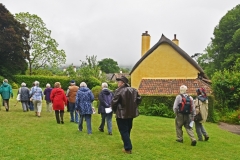 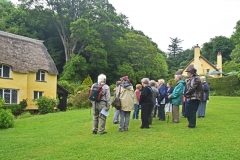 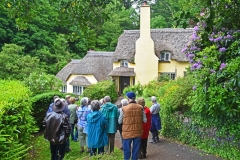 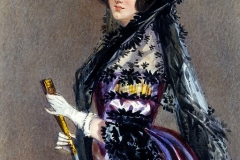 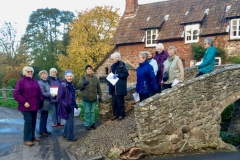 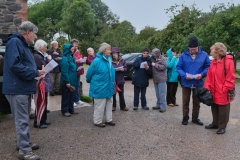 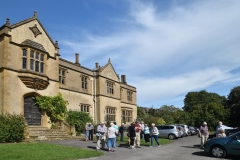 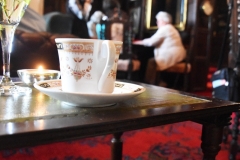 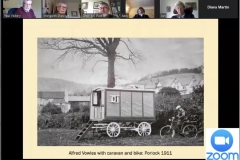