Shared Learning Projects : What are they?

A Shared Learning Project (SLP) involves a group of U3A members researching a specific topic in partnership with another organisation or institution such as a museum, art gallery or library.  Our U3A has a proud record of involvement with a number of research areas, beginning with a collaboration with Minehead Museum.

Cherrie Temple, a long-standing Minehead and District U3A member,  has been involved with a number of Shared Learning Projects.

Cherrie writes: Over the past few years, I have closely followed, and participated in, our U3A’s Shared Learning Projects (SLPs) with Minehead Museum and latterly, the Exmoor National Park Authority.  I enjoy research and would like to encourage others to participate in SLPs. I have just completed a stint as a volunteer at Regional Level co-ordinating the SLPs in the South West region.  Please contact me if you would like to become involved in a local project – and it doesn’t have to be local history.

Our latest Project,  begun in late 2019 and continuing through the Pandemic, is the Knight Family Archives Transcription Project, undertaken in partnership with the Exmoor National Park Authority. Follow the link to the pages which describe the Project in detail. You could help by joining the team!

Previous Projects (scroll down for more detail on each)

Powerpoint overview of Shared Learning Projects up to 2019.

The Minehead Museum has been a major collaborator in recent years. The Museum opens in March each year (normally open 10–4 daily except Sunday, when it opens at 11; closed Mondays unless it’s a Bank Holiday), so do go along for a look.  At the desk you’ll find a friendly steward (very possibly one of our U3A members), who’ll be happy to answer any questions and chat.  The project work is placed in display folders for visitors to read, with many of the highlights shown on display boards in the museum.  Previous projects have been highly successful, attracting much interest from visitors.  At the end of the season all research is retained for future use and is building into a significant resource.

The SLP 2017–18 was a collaborative research project engaging U3A and museum volunteers in exploring a particular theme that threw light on another aspect of Minehead’s rich history and which has now become part of the Museum’s permanent collection.  The range of topics included:

Click here to read Cherrie Temple’s report on the project.

Presentations on the research undertaken by members of Minehead & District U3A were made to our Special Interest Day in March 2017.  Over 100 members attended Minehead & District U3A’s Special Interest Day on 22 March – the theme this year being Maritime Minehead, reflecting the research work that seven U3A members have carried out for this season’s exhibition at Minehead Museum, which opened for its 2017 season on 25 March.  In the morning, Museum Trustee Sue Lloyd, who co-ordinated the project, introduced the five speakers, each speaking about their area of research.  Peter Dean was first, talking about the history of Minehead harbour and the role of the Luttrell family, followed by Dr John Godrich, whose subject was the shipping that used the harbour – from Celtic saints to the last working vessel, the Emma Louise, in the 1950s.  Both highlighted how busy and important Minehead was as a trading centre in centuries past.  Di Martin’s presentation was on smuggling in this area, the ‘free trade’ that avoided import duties and was rife at all levels of society; and Barbara Hoffbauer introduced us to some mariner families of Quay Town, from her studies of census records and crew lists.  One of her photographs, taken in about 1930, showed seven Minehead mariners sitting on the sea wall.  Last to speak was Cherrie Temple, whose subject was the short-lived pier and the paddle-steamers that have visited Minehead since the mid 19th century.  Click here to view Cherrie’s presentation.

After lunch, a break from serious research, with journalist, author and boatbuilder Tony James’ hilarious talk entitled ‘Up the Creek – a lifetime trying to be a sailor’, so the nautical theme continued.  Tony had brought along a number of his model boats for the audience to see.  And, fittingly, the day ended with the Acorn Shanty Crew singing a number of seafaring songs, concluding with the Padstow Farewell.

Entertainment and Leisure in Minehead’s Past 2015/16

In 2015, Julian Luke, the Museum Curator, approached the U3A and suggested another SLP working towards the 2016 Summer Exhibition on the theme of Entertainment and Leisure in Minehead’s past.

A good start was assured when our Local History Group Convenor invited Len Haysom, the South West Region’s SLP Co-ordinator to come and speak to the Group, alongside Julian, with the positive result that six members were keen to participate.  The topics selected were:

Everyone worked hard on the project, which was successfully completed on time with all objectives met.  The researchers had the opportunity to share their findings with other members of the SLP and at a meeting of our U3A local history group.  All agreed that they had found the research interesting and enjoyed the process.  At the start of the new season, the SLP participants and other interested U3A members were delighted to be given a preview of the displays at the Museum.

Julian was an active member of the team and very generous in giving his time to help and advice.  It was good to share small individual successes with him, such as unexpectedly finding photographic evidence proving that the famous cricketer, C B Fry, played for Minehead Cricket Club before embarking on his county and test career.

The success of the project led to plans for a further SLP with the Museum for the 2017 season on the maritime history of Minehead. 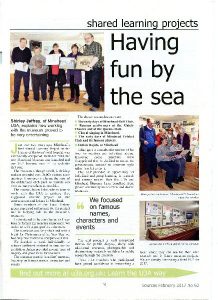 Minehead U3A’s first SLP, on the history of the town’s Old Hospital, featured in a display at the Museum in 2014–15.

A small team from Minehead & District U3A concentrated on the iconic old hospital site in the centre of the town and the memories attached to it and including a presentation of a time-line detailing the building’s major developments.  The building remained working as a hospital until 2011.  It shows the many changes this iconic building has undergone since its construction as a public hall in the late 1880s.  A display including photographs illustrating some of its alterations, alongside scenes of hospital life, was developed for the Museum.

Additionally, over ninety interviews have been conducted to record its anecdotal history.  Some of these will be published in booklet form through the auspices of the Museum.  The material produced by the project has been passed on to Minehead Museum for archiving, to aid any future research.