After 17 happy years, Book Group 1 has decided to close.

February.  We discussed Joanne Harris’s book Five Quarters of the Orange.  We all thought it was a good choice.

January.  First of all – Season’s Greetings.  I hesitate to say Happy New Year, as it is not easy at the moment.  However, we met in January on Zoom, which we have been using since it became too cold to sit in a garden.  Rosemary hosted the meeting as I had a medical appointment, but I was able to join the group later. 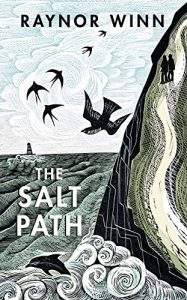 We met in January on Zoom.  We discussed The Salt Path by Raynor Winn, who walked the South West Coast Path with her husband and very little money, after they were made homeless.  We would recommend this book, plus her second one called Wild Silence.

December.  This month we read and discussed The Words in my Hand by Guinevere Glasfurd.  A marvellous book combining little known facts with fictional bits to fill out the story. We recommend it to anyone who likes history and a good story.  This is Guinevere Glasfurd’s first novel.

November. After a bit of a struggle plus the expert help of a member’s partner, we managed to get together on Zoom for our November meeting.  We discussed Diary of a Medieval Lady by Philippa Moseley, which is set locally and deals with the bloody War of the Roses.  Elizabeth Courtney is buried with her first husband in Porlock and we plan to visit when we get back our freedom.  If you are interested in local history and the status of women at that time, then this is the book for you.

October. This month we read and discussed by Zoom The Mitford Murders by Jessica Fellowes.  Our general opinion of the book was that it was quite a good read but too long at over four hundred pages.  The title was misleading as it was not a murder done to or by the Mitfords and she was using the Mitford name to gain interest.

September.   We met over Zoom, having had a practice the week before.  I’m relieved to report that it all went very well, so Zoom will be the norm until we can meet again in my house.

August.  Our group has been operating twelve months of the year since 2004 and I have never in all these years found running it so challenging as in the last few months.  This was due to a number of factors, the most difficult being our range of technical skills, from members not having a computer at all and no interest, to being very proficient.  I tried to cater for them all. Our book of the month was The Vanishing Act of Esme Lennox by Maggie O’Farrell.

Books Read – About the book and a review