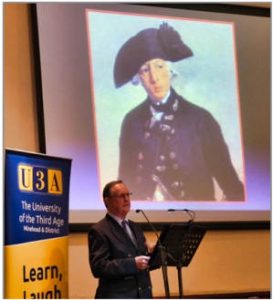 Admiral Arthur Phillip RN (1738–1814) was a remarkable man.  By the end of Sir Roger Carrick’s fascinating presentation we all realised this.  Although Admiral Phillip is revered and honoured in Australia, he is little known in his own country. Sir Roger has, for many years, worked to rectify this.

We learned that – though of modest birth – Phillip studied at Greenwich Hospital School, joined the Royal Navy at the age of 15, learned several languages, sailed on many different kinds of ships (including a Portuguese ship where he first saw slavery and was horrified), and eventually commanded his own ships.  But it was his command of the first fleet of ships taking convicts to Australia (1787), his establishment of the first penal colony there in what is now Sydney (1788) and his position as the first governor of New South Wales for which he is most remembered.

Sir Roger explained that, despite what some films and books would have us believe, the colony was not a place of severe restrictions and violent punishments.  Even before arriving in Australia – in fact as soon as his ship, HMS Sirius, had passed the Isle of Wight – Phillip had the prisoners unshackled.  Once in Australia the prisoners were afforded the same rights as free men, being allowed to marry and even given land grants.  Some eventually became magistrates and lawyers.

During times of scarcity Phillip ate the same rations as everyone else.  Possessing an innate respect for mankind, he instructed all settlers to treat the aborigines with respect.  He was a visionary – an enlightened figure who has been praised by many, including Horatio Nelson.  He has been described as humane, fair, reasonable, truthful and courageous.  Today the British are coming to know more about this remarkable man.  Memorials to Admiral Phillip can now be found in Westminster Abbey and St Mary-le-Bow Church in London, and outside the Assembly Rooms in Bath.  He is buried in St Nicholas Church, Bathampton.   Karen Mahony 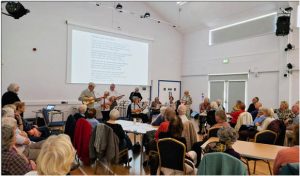 The October coffee morning took place in a different location from usual: this time it was in the recently-opened Williton Pavilion, rather than in our regular U3A coffee morning home at the Minehead Baptist Church.  This occasion had a 40s theme and, as well as coffee and chat, U3A members and visitors enjoyed a talk about a WW2 pilot, followed by a singalong of 40s-era songs accompanied by our U3A ukulele players.

The speaker, Jonathan Pearman, told the audience something of his father Bob, who was a bomber pilot during WW2.  Jonathan and his sister knew nothing of this until just two years before their father died, for like so many who fought in the two world wars, Bob had never spoken about what he’d been through.  Fortunately, Jonathan’s sister finally managed to persuade Bob to recount what he remembered of his life as a young man serving in the Royal Air Force.

While we’ve all read about and seen films of those wartime stories of derring-do and amazing bravery, Jonathan telling us about his own father doing exactly the same made it all seem so much closer to home and personal.  Flying over Germany in the face of enormous searchlights with a range of two miles, that could fix on one bomber in a squadron in order to locate them all, meant that Bob had to dive to get out of the beam, and just hope to be able to flatten out before hitting the ground. And in winter this might be after flying for hours in the pilot’s seat in temperatures as low as –25° unable to move!  The audience, which included people old enough to remember WW2, listened in awe as Jonathan regaled them with tales of his father’s exploits.

Helen Baggott was the speaker at our September coffee morning.  She told the audience how she became interested in tracing the stories behind postcards sent 100 years ago.  Starting with just a recipient’s name and address, Helen has found out an enormous amount about the people who sent and received these cards, their families, their occupations and their place in history.  She chose to tell the stories behind a few of her postcards, starting with the one which had first inspired her – a charming Christmas card sent in 1913 by Charles Freeman to his brother Gilbert at Chelsea Barracks.  Gilbert died in WW1 at the Battle of the Somme, but Helen’s research revealed a wealth of Freeman family history, some of which she shared with us.

Another story was from a card sent in 1911 to Miss Lucy Blackband in Cavendish Square, London, from her sister Ada in Coventry.  Helen discovered that Lucy was employed as a maid in the home of a royal physician.  Kenneth Hume sent a card to his father Sidney in 1912: the following year, like millions of others who took the opportunity to start a new life, his uncle and aunt emigrated to Canada with their five children. A poignant little card sent to seven-year-old May was from a brother who perished with Lord Kitchener when their ship struck a minefield and sank in 1916.  Helen’s final story for us was based on a card sent in 1906 by Will Jones, a clerk, to his mother Emily.  Born in Somerset, Emily had received no formal education, and worked from the age of 10 for a laundress in Bath.  Helen believed Emily made sure that her children enjoyed a better life than her own, with the opportunities a proper education could provide.

Following the talk, a member of the audience told Helen that, while doing his National Service many years later, he had served in the same regiment as Charles Freeman.  In the regiment at the same time as our U3A member was a William Freeman, who, it turns out, was a distant relative of Charles. Unfortunately, the member in question didn’t give his name, but we do hope he sees this, for it’s such a nice link with the story!