The Christmas song over time has moved between the celebration of a religious event, romantic love songs to the whimsical humour of festive enjoyment. 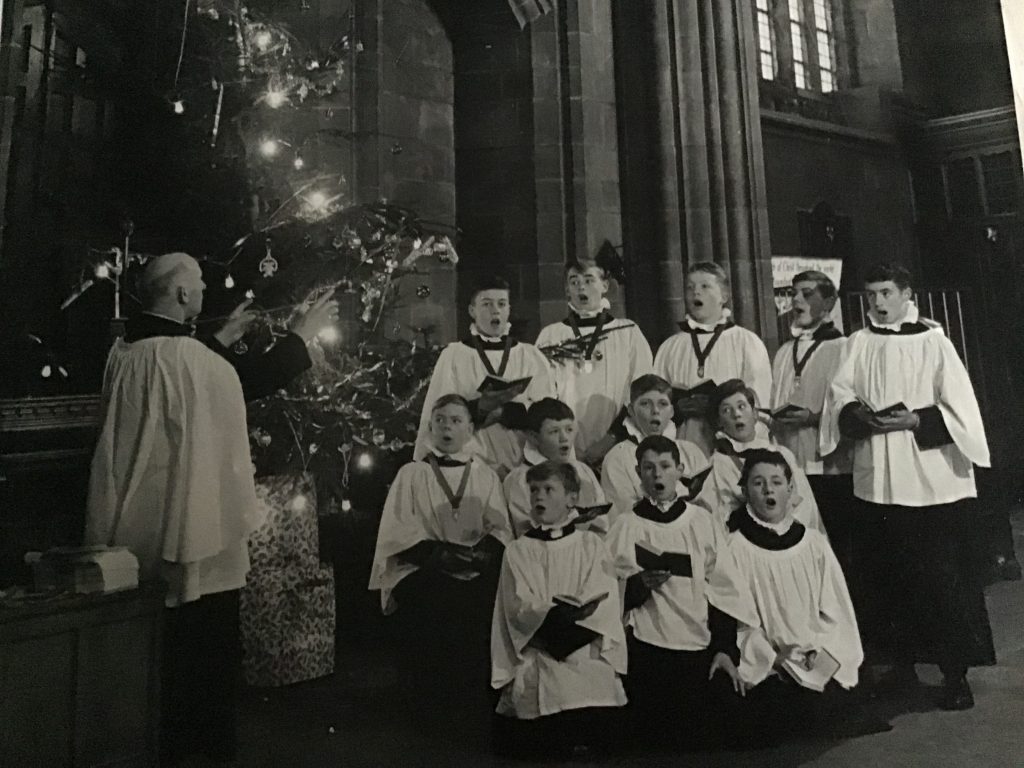 Until my early teens I was a chorister in a large C of E Church in Stockport.  Christmas carols and anthems were a major part of my year.  In 1959 I was in the choir that broadcast live on Christmas morning on BBC.  Being on live television in the 50’s/60’s was a serious event.  In 1962 we also sang at the Christmas broadcast on the Light Programme on Sunday 23rd December.  Thanks to Google, I have found the listings for both these events.  At the same time I was growing up at a time when the commercial popular music world was filling the airways, and the shops, with Christmas music.  Soon the Christmas number 1 was the target of every record company.  So from the oldest Christmas song of Iesus refúlsit ómnium circa 4th century to ‘All I want for Christmas is you’ this year’s  number 1, this project will pick out some of the songs and carols, the dates they were popular and the stories behind them.

I found a list of the 8 oldest Christmas songs on the internet.  These range from the 4th to the 13th century’s and as already mentioned the oldest Latin song about Jesus Christ is Iesus refúlsit ómnium (Jesus Light of all Nations ) attributed to St Hilary of Poitiers.  He is considered the first Latin Christian hymn writer.

Next came Corde natus ex parentis (Of the Father’s love begotten) again written in the late 4th century by Aurelius Prudentius, a Roman poet and hymn writer.  This Christmas plainsong is apparently still in use today.

Written in the 12th century, The Friendly Beasts is the first traditional Christmas song that fits the criteria for this project.  It is about a donkey, a cow, a sheep, a camel and a dove that are present at Christ’s birth and celebrates the nativity scene.  The modern English lyrics were written by Robert Davis in 1920.  Over the years the song has been recorded by Burl Ives, Harry Belafonte, Johnny Cash, and Garth Brooks.

There are then 4 other Latin songs from the 13th and 14th centuries but they are not that well known in the UK.  However, the next in chronological order, and possibly still one of the best known is.

Based on a 13th century carol, but today’s version created in 1853 by John Neale and Thomas Helmore.  Interestingly the tune was based on a spring carol and has come into much criticism given its light tune for a serious subject.  Elizabeth Poston, in the Penguin Book of Christmas Carols, referred to it as the ‘product of an unnatural marriage between Victorian whimsy and the thirteenth century dance carol‘.  She goes on to detail how Neale’s ‘ponderous moral doggerel‘  does not fit the light-hearted dance measure of the original tune, and that if performed in the correct manner ‘sounds ridiculous to pseudo-religious words.’  A similar development has arisen with the song ‘O Christmas Tree‘, whose tune has been used for ‘Maryland, My Maryland’, ‘The Red Flag’, and other non-related songs.  By contrast, Brian Scott, quoting The Oxford Book of Carols criticism and hope that the carol would ‘pass into disuse‘, says ‘Thankfully, they were wrong‘ for the carol ‘still reminds us that the giving spirit of Christmas should not happen just on that day...’  Jeremy Summerly and Nicolas Bell of the British Museum also strongly refute Dearmer’s 20th century criticism, noting ‘it could have been awful, but it isn’t, it’s magical…you remember it because the verse just works‘.

God Rest Ye Merry, Gentlemen
Dating back to the 16th Century (and possibly earlier), the song is one of the oldest carols around, and the earliest printed edition was done in 1760.  In the carol, the singer reminds the listener that there is no reason for despair, because the birth of Christ means the triumph of good over evil.  The song gets a reference in Charles Dickens’s ‘A Christmas Carol’ as Ebenezer Scrooge chases off a caroller singing it in front of his counting house.

Ding Dong! Merrily on High
With celebratory bell-ringing and a cheery chorus of ‘Gloria’s’, it’s near impossible to dislike this wonderfully festive carol.  The tune first appeared as a secular dance tune in a book on dance written by Jehan Tabourot.  Written in the 16th century, but the words first published in 1924.

Oh come all ye faithful
The date is disputed, but the words are from the 17th century, possibly by John IV of Portugal (1604–1656), or John Reading (1645–1692), or John Wade (1711–1786), or anonymous Cistercian monks.  The earliest printed version is in a book published by John Wade, but the earliest manuscript bears the name of King John IV, and is located in the library of the Ducal Palace of Vila Viçosa. A manuscript by Wade, dating to 1751, is held by Stonyhurst College in Lancashire.  The arrangement by Sir David Willcocks was originally published in 1961.  This makes use of the basic harmonisation from The English Hymnal, but adds a soprano descant in verse six (verse three in the original) with its re-harmonised organ accompaniment, and a last verse harmonisation in verse seven (verse four in the original), which is sung in unison.  This carol has served as the penultimate hymn sung at the Festival of Nine Lessons and Carols by the Choir of King’s College, Cambridge, after the last lesson from Chapter 1 of the Gospel of John.

Adeste Fideles is traditionally the final anthem during Midnight Mass at St. Peter’s Basilica in the Vatican.  It was the last hymn we sang in 1959, as we processed out of the church on Christmas Day.  A camera, on rails, tracked us down the aisle as we sang the last verse.  This is only sung on Christmas morning, and has the amazing descant mentioned above.

Yea, Lord, we greet thee, born this happy morning;
Jesus, to thee be glory given!
Word of the Father, now in flesh appearing!

I saw three ships
A traditional English carol, ‘I Saw Three Ships’ reportedly dates back to 17th Century Derbyshire, when it was first printed, though it wasn’t published officially until 1833 by a solicitor, named William Sandys.  One of the interesting aspects of the song is that it talks about the ships sailing into Bethlehem, which of course is many miles from any body of water.

At this point, I diverge slightly from carols to cover Handel’s Messiah from the 18th century.  It has been 279 years since George Frideric Handel’s beloved Messiah oratorio first premiered in Dublin in 1742.  Although Messiah premiered during Easter celebrations, through the years it has become both a Christmas and an Easter tradition for Christians everywhere in the world.  It took time for Messiah to find its niche as a Christmas favourite.

‘There is so much fine Easter music—Bach’s St. Matthew Passion, most especially—and so little great sacral music written for Christmas,’ says Cummings. ‘But the whole first part of Messiah is about the birth of Christ.’ By the early 19th century, performances of Messiah had become an even stronger Yuletide tradition in the United States than in Britain. Now, of course, Messiah is a fixture of the Christmas season. Woe to the concert hall in the United States or Britain that fails to schedule the piece around the holiday, when, as well, CD sales and Web downloads of the oratorio soar. For many amateur choirs, the work is the heart of their repertoire and the high point of the year.
Smithsonian Institute.

There are few carols from the 18th century that remain popular today but this by Mendelssohn is one:

Hark, the Herald Angels Sing
While the original tune was by German composer, Felix Mendelssohn, everything else about this song is decidedly English.  Charles Wesley wrote the lyrics in 1739 and originally intended for his words to be married to slow and solemn music, but musician William H. Cummings had other ideas.  Cummings adapted Mendelssohn’s ‘Festgesang‘ to Wesley’s lyrics and gave birth to a Christmas classic that is a favourite of choirs all over the United Kingdom.

The 19th century was the heyday of carol writing.  Here are just a few, in roughly chronological order.

Silent Night
Originally written in German, ‘Stille Nacht’ was composed in 1818 by Franz Xaver Gruber with lyrics by Joseph Mohr, and was translated to English in 1859.  During the Christmas truce of 1914, the carol was sung simultaneously by English and German troops.  Silent Night is basically the Happy Birthday to you of Christmas carols: it’s the most popular Christmas song in the world and has been translated into over 100 languages.  Silent Night was even declared an intangible cultural heritage by UNESCO in 2011.

Jingle Bells
This is one of the best-known and commonly sung American songs in the world.  It was written by James Lord Pierpont (1822–1893) and published under the title ‘One Horse Open Sleigh‘ in the autumn of 1857.  It has been claimed that it was originally written to be sung by a Sunday school choir, or as a drinking song.  Although it has no original connection to Christmas, it became associated with Christmas music and the holiday season.  It was the first song broadcast from space, in a Christmas-themed prank by Gemini 6 astronauts, Tom Stafford and Wally Schirra.
While in space on December 16, 1965, the astronauts produced a smuggled harmonica and sleigh bells, and with Schirra on the harmonica and Stafford on the bells, broadcast a rendition of ‘Jingle bells’.

Even in the southern hemisphere this is a popular Christmas Song:

Dashing through the bush, in a rusty Holden ute,
Kicking up the dust, esky in the boot,
Kelpie by my side, singing Christmas songs,
It’s Summer time and I am in my singlet, shorts and thongs