The Pagan celebration of Winter Solstice (also known as Yule) is one of the oldest winter celebrations in the world.

Ancient people were hunters and spent most of their time outdoors.  The seasons and weather played a very important part in their lives.  Because of this, many ancient people had a great reverence for, and even worshipped, the sun.

The name ‘Yule’ actually comes from the pre-Christian festivities of Germanic tribes, and is believed to have been handed down to us from the ancient Norse in particular.

The Norsemen of Northern Europe saw the sun as a wheel that changed the seasons.  It was from the word for this wheel, houl, that the word yule is thought to have come.  At mid-winter the Norsemen lit bonfires, told stories and drank sweet ale.

Yule is a time of celebrating the return of the light.  From this point forward, the days will gradually grow longer again, until we reach the height of the Sun’s power at the Summer Solstice.  The waning half of the year is over, and warmth, growth, and light will reign again!

The significance of the Winter Solstice has been recognized for thousands of years, ever since human beings first observed the ever-changing patterns of sunrise and sunset over the course of the seasons.

The ancient Romans, Greeks, and Persians all held festivals at this time, many of which celebrated the birth of one or more gods. Of course, the leaders of the early Christian church decided that this was a good time to celebrate the birth of Jesus as well, since one of their strategies for winning converts was to align their holidays with already-existing pagan festivals and the Roman Saturnalia. This happened in around the fourth century AD.

I have also found that the winter Solstice (in June of course) was celebrated by ancient cultures in the Southern Hemisphere.  On June 24, in time with the Southern Hemisphere’s winter solstice, the Inca Empire celebrated Inti Raymi, a festival that honoured the Inca religion’s powerful sun god Inti and marked the Inca new year.  The festival is still celebrated throughout the Andes, and since 1944, a reconstruction of Inti Raymi has been staged in Cusco, Peru, less than two miles from its Inca Empire home. 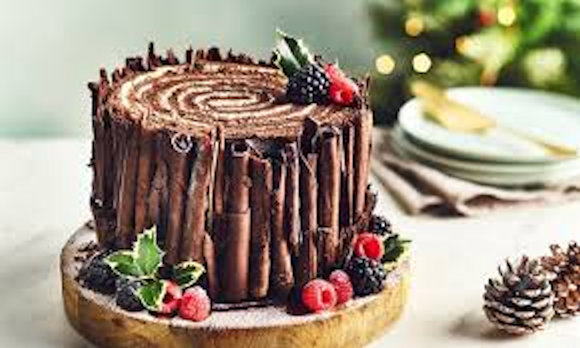 And we have all heard of or eaten the chocolate Yule Log.

However, the Yule Log was originally an entire tree, that was carefully chosen and brought into the house with great ceremony.  The largest end of the log would be placed into the fire hearth while the rest of the tree stuck out into the room!  The log would be lit from the remains of the previous year’s log which had been carefully stored away and slowly fed into the fire through the Twelve Days of Christmas.  It was considered important that the re-lighting process was carried out by someone with clean hands.  Nowadays, of course, most people have central heating so it is very difficult to burn a tree!

The custom of the Yule Log spread all over Europe and different kinds of wood are used in different countries.  In England, Oak is traditional; in Scotland, it is Birch; while in France, it’s Cherry.  Also, in France, the log is sprinkled with wine, before it is burnt, so that it smells nice when it is lit.

In Devon and Somerset in the UK, some people have a very large bunch of Ash twigs instead of the log. This comes from a local legend that Joseph, Mary, and Jesus were very cold, when the shepherds found them on Christmas Night.  So the shepherds got some bunches of twigs to burn to keep them warm.

This is known as the Ashen Faggot.

Video of Dunster Ashen Faggot from 2015

Many Christmas Traditions Are ‘Borrowed’ From Yule

Many of the traditions we use at Christmas time today are borrowed from Yule traditions of old.  Whether they’re from myths, feasts, folklore, ancient beliefs, oral stories told, or festivals, they’ve been woven into the fabric of our modern-day customs.