On 19 January 2019, we met at Townsend House for a talk by Mary Ewing of Somerset Archaeological and Natural History Society (SANHS).  Mary is an architect, now retired, who is putting her energies into researching the histories of ancient buildings.  She told us that the Society has an excellent library, containing books dating back to the 1600s, to assist in researches.  Lately she has been interested in some of the buildings in Dunster.  However, owing to an unfortunate clash with Time Team, who were also in Dunster doing comprehensive digs around the village, she and her helpers were diverted to Porlock, at the suggestion of the Exmoor National Park Authority.

Eventually they were able to make a start in Dunster, and she explained some of the methods used to date buildings accurately.  The use of dendrochronology technology to date buildings has been an amazing breakthrough.  Counting the rings of the timbers can result in an accurate indication of the age of the building.  This is most effective on oak timbers, although elm poses a problem.  But as oak was the timber generally used in ancient buildings and elm not used until later, dendrochronology is accurate in most instances.

In Dunster, Mary investigated a number of buildings, some of which dated back to the 1400s.  The timbers tell the story – in particular the timber cruck method of supporting a building from the ground level up into the roof.  Where these are blackened by smoke, the building will have been in the open-hall style, with the smoke going from the fire at ground level right up into the roof timbers.  The Old Priory, next to the church in Dunster, is one of these open halls and almost certainly was the refectory belonging to the Benedictine Priory in the village.  Some of the buildings in West Street and High Street also had smoke-blackened roof timbers.  In West Street, indeed, there are six examples of this house type close together, which is rare.

Mary’s next survey on behalf of SANHS will be at the Gatehouse to Dunster Castle, which should prove interesting.  As well as the actual building surveys, other relevant documents – such as census details, tithe documents and birth, marriage and death information – also provide clues about the inhabitants and their occupations.  Mary said that that exhibitions play an important part in the work of the SANHS and a major exhibition is planned for 2020.  Volunteers are always welcome take part in the research and in fact one of our group members, Barbara Hoffbauer, is already a SANHS volunteer. 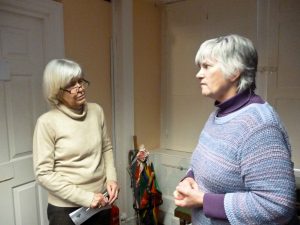 Barbara’s interest is mainly in documentation and putting the human interest into the story of the buildings.  She followed Mary’s talk by enlightening us as to some of these stories.  She showed us the tithe map from 1840, which is the earliest comprehensive map of Dunster.  Each house and garden is carefully measured on this.  In the 1851 Census and birth, marriage and death documents, Barbara was able to tell us something about the occupants of the houses that Mary had been telling us about from the structural aspect.

What is now the High Street in Dunster, has also been known as Chipping Street (1432) and Market Street (1453).  The word ‘chipping’ actually meant ‘market’ at that time.  Another source  of information is Margaret Luttrell’s rent book of 1746.  At that time there was a sharp decline in the cloth trade and the fulling mills and cottages were described as having no value!  Millstream, now one of Dunster’s many B&Bs was in 1760 used as a poor house.  Before that time, this property was probably a fulling mill.

Another interesting source of information comes from criminal offences records.  A particularly lively one is an account of a certain John Tyrrel, who in 1652 was found to have gone into the fields at Dunster Marsh, made himself naked, and had carnal knowledge of three women before being arrested and taken to court for his misdemeanors.  Barbara also brought along some copies of inventories prepared for Dunster inhabitants on their deaths.  The inventories listed in detail all the individuals’ worldly possessions, and their worth.  There was some curious phonetic spelling, such as cubberd, chaire, kittel, sawcers and kitching.  All these things were meticulously valued – and some of the lists even finished with ‘Item things forgotten’ valued at 2/- and on another one ‘Things out of mind’ valued at £1/10s.  All fascinating and an insight into the lives of those people…

Thanks to Mary for her information on architecture and dating, and to Barbara for bringing to life some aspects of Mary’s work.