The 2nd May 2019 was a dry but breezy day and eighteen members met our guide Tony White at Porlock Weir car-park.  Over the last decades, Tony has researched the literature and has spent many days exploring the site of Ashley Combe, the ‘summer palace’ of Ada Lovelace in the period 1835 to 1852.  He took us on a 2 ½ hour energetic walk in the area with a comprehensive summary of its history and his experiences here.

Ada Byron (1815-1852) was the only legitimate child of Lord Byron and married William King, who later was made Earl of Lovelace.  Lord Byron took off to Greece soon after Ada’s birth and never came back – so Ada was brought up by her mother to be as unlike her errant father as possible.  Her consequent training in mathematics and logic led to her becoming accepted by notable contemporary mathematicians as an equal.  Her friendship and working relationship with Charles Babbage of ‘Analytical Engine’ fame is well documented and she is held in high regard by computer historians and feminists alike.

In 1835, Ada married William King and their honeymoon was spent at Ashley Combe, on the hillside a few hundred metres SW of Porlock Weir.  Much effort and money was spent on this property by King and, although the house has been demolished, evidence of the elaborate landscape features are still visible in the grounds.  The King family had several properties in England and Scotland and lived in each at different times of the year but, as Ada and William grew apart, she seems to have been particularly fond of Ashley Combe.

After Ada’s death from cancer in 1852 the property was neglected for decades before being adopted by Mary, Countess Lovelace (Ada’s daughter-in-law) and later owners, up until its final abandonment and demolition in the 1960s.  Tony, as a youth, was able to surreptitiously enter the empty and derelict house. 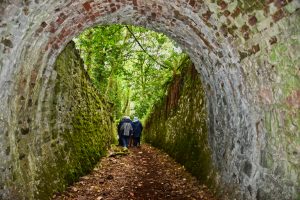 From Porlock Weir, Tony led us up into the woods along the Coastal Path, passing houses (one of which is said to have featured in the events of the Jeremy Thorpe scandal), designed by the architect Charles Voysey for Lady Mary, to reach the original gatehouse, which now serves as toll-house for the Worthy Combe toll road.  Continuing upwards, we walked through two tunnels where the right-of-way passes under the private paths which served to connect the house (on the uphill side) to routes leading to the beach, where Ada had built a therapeutic sea-water bathing house.  The Coastal Path in this area has been disrupted by landslips and the signposted route now leads uphill onto part of the network of paths built by the Lovelaces.  Ashley Combe is still private property with no public access but, from outside the fence, we were able to view a large, enigmatic tunnel, looking decidedly unsafe with a collapsed roof, that curves down towards the site of the house.  Continuing steeply up the Coastal Path we came to Ada’s seat, cunningly built into the stone retaining wall on the uphill side of the track.  No doubt, 160 years ago Ada was able to look across Porlock Bay to Hurlestone Point and to the coastline of Wales.  All we could see was bird’s-eye view of the forestry work currently under way to let light into the overgrown wood!

Ada’s seat was the turning point on our walk and we returned via Lady Mary’s tennis court and the row of fishermen’s cottages at Lane Head.  The latter were already in existence when William King started his extensive programme of improvements at Ashley Combe and were modified by him to be occupied by the servants at the house.  It seems that the Lovelaces didn’t want the hired help to intrude on their privacy by living in.  Incidentally, William King brought in a large number of Italian craftsmen to work on the elaborate and expensive modifications to Ashley Combe, and he neglected to supply these men with return tickets –
DNA testing of long-term Porlock people might be interesting!

Leaving the best to the last – Tony asserts that this area is one of the most haunted in England and, whilst he does not claim to have seen anything on his solitary explorations, he does admit to feeling things as he wandered around and to have talked to people who have seen!

Tony gives regular talks about his researches and has been planning a book on the subject.  So keep your eyes open for notices of talks and book.