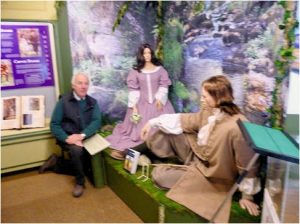 The Dulverton Heritage Centre welcomed us with tea, coffee and cake before we sat down to listen to John Burgess who spoke about Lorna Doone – the book, the author, and its setting on Exmoor.  John, Somerset born, was a BBC Radio journalist and producer for almost 25 years.  He is a member of the Exmoor National Park Authority and has a particular interest in this subject.

Described as ‘the Last Victorian’ by one of his biographers, R D Blackmore (author of Lorna Doone) was passionate about Exmoor, where his roots lay and where he spent a large part of his life.  He conveys such a strong sense of place in the book that it is difficult, sometimes, to remember that it is in fact a novel: some of the protagonists are based on real people known to Blackmore, but the story is his own invention – although local folklore and legend may have inspired some parts of the tale.

Indeed, from the start we found ourselves discussing whether Plovers Barrow Farm was Malmsmead or Oareford Farm, as though it was fact rather than fiction!  Maybe Blackmore himself hadn’t decided on one or the other.  John asked us how many had read the book and I think probably half or fewer members of our group had done so.  Like most Victorian novels, it is a wordy book with lengthy descriptions, especially of the landscape, but I think most who have read it think it worth the effort.

The Doones may or may not have had some base in reality.  But the location Blackmore gives as their hidden stronghold at the eastern end of Hoccombe Combe certainly exists and there was a real settlement there.  All that now remains of this are some grass-covered mounds and piles of stones, but no Doones!  Among places mentioned in the story that are nearer to us is Dunster, where Jan Ridd stayed after a six-day walk from London.  ‘Now I never saw a prettier town than Dunster’ he says as he reaches it in the evening and: ‘most kindly they received me.’  There is also mention of Watchet, where Lorna’s aristocratic lineage is confirmed in a meeting with a relative.  As a young child, she had been kidnapped by the Doones, who had hoped to marry her to one of their own and thereby acquire her property.

A strong sense of history runs throughout the book, too, as it is set in the time of the Monmouth Rebellion and there are characters in the book with opposing loyalties – either to James II or to the Duke of Monmouth.  This also brings in the Catholic/Protestant issue. 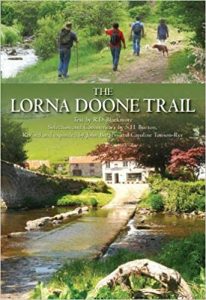 This report could go on a long time because of the detail in the book.  But it is not going to, because anyone unable to make this talk may like to know that the Dulverton Heritage Centre has Lorna Doone as its subject for the coming year (2019); you can find displays, maps, presentations and advice for those looking for the various locations made famous by the book.  John Burgess has also produced a book of his own, The Lorna Doone Trail, which helps to connect plot with place, putting the narrative in its real-life context with the help of some excellent illustrations and commentary.

And thanks to John and the staff at the Dulverton Heritage Centre we had an entertaining and fascinating morning.