Our first meeting of the year, held in Townsend House on Thursday 6 February, was a most interesting talk by Dr Bette Baldwin about Hoar Oak Cottage. Bette is one of the descendants of the shepherds who lived there. 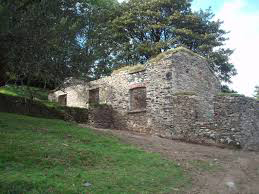 Hoar Oak Cottage lies just outside the old Royal Forest of Exmoor near the Devon/Somerset border. It was purchased, with 25 acres of land, by the National Park Authority in the 1960s.

The oldest part of the cottage is believed to date from the fifteenth century but archaeological evidence only dates from the 1600s. The traditional sheep farming practice was to take the native Exmoor Horn sheep up onto the high moor in the summer for grazing. The earliest building was a simple hut for the one shepherd that looked after his flock during those summer months.

By the first part of the 19th century shepherding families were living permanently at Hoar Oak and the cottage was extended to accommodate their families. It seems the cottage was owned by the Vellacott family and their family members or employees lived there until about 1870 when the cottage was rented by Frederic Knight who took over managing the Forest of Exmoor estate from his father John Knight. Frederic began a sheep farming experiment bringing Scottish black faced sheep and Cheviots from the Scottish Borders along with Scottish shepherds, some with their families.

Between 1870 and 1920 Hoar Oak was occupied by four Scottish shepherd families and further additions were made to the building in 1903.

Hoar Oak was bought by the Fortescue family in 1920 and was occupied by shepherding families until 1960. It slowly fell into dereliction until it was considered unsafe by 2000. Some of the surviving relatives set up ‘The Friends of Hoar Oak’ who negotiated with the park authority and in 2014 it was conserved as a heritage ruin with its roof removed and its walls capped for safety.

Some of the Scottish shepherds returned to Scotland but many stayed and married into the local community.

Robert Tait Little, the head shepherd on Exmoor kept a diary which combined with the memories of descendants has given insight into the way of life for these families. “You could say it was like the Wild West – we were like little savages out all day in all weather.” Many of the descendants had very fond memories of living at Hoar Oak but it was a very hard life, particularly in winter, and the descriptions of the ‘facilities’ for cooking and washing, the source of clean water and the disposal of waste made us very grateful for the convenience of our homes.