On 7 March 2019 members of the Archaeology (Local History 2) Group were met by Chris Sidaway, whose enthusiasm made for a compelling morning in spite of the very cold conditions that met us as we left the Brick and Tile Museum, where we started our tour.

Chris told us that, after the Romans left Britain, it was not until the 1600s that bricks and tiles began to be manufactured in this country, mainly in the East and Midlands, where brick-built houses had begun to be fashionable.  Taunton’s almshouses, which were completed in 1635, are among the early examples of brick building. 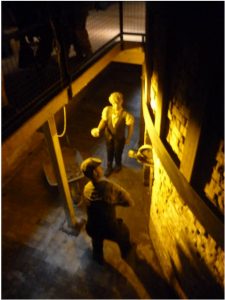 In the 1720s builders began to make bricks on sites where the clay was suitable.  Fired with tinder inside a clay mound, the bricks emerged not in any way uniform, some of them being dark and even a bit burnt.  Kilns built of bricks in a beehive shape succeeded this primitive method of making bricks.  Bridgwater, although it had dozens of such kilns at one time, now has only one example, which is on the site of the museum.

The industry went on up until the 1860s, by which time the bricks and tiles were made by an extrusion process: this forced the clay through an orifice of the desired shape, giving a uniform result.  By now, Bridgwater tiles were helping to meet a great demand, which included that from the British colonies.  The popular Double Roman roofing tile was also produced in great quantities.  There is still a need for tiles produced in this fashion in the renovation and conservation of old buildings especially by English Heritage.  Sadly, though, they now have to be imported from other countries and it was short sighted, maybe, not to keep just one of these brickyards going to meet that need.

We left the museum to go on a walk around some parts of the town and saw some of what remains of the canal system into the town.  This Taunton–Bridgwater section was completed in 1812, but by 1841, with the coming of the railways, it was largely redundant.  We saw a Brunel-designed ‘telescopic’ railway bridge that splits and slides back on runners in order to let shipping through.

Little remains of the once impressive castle built in the 13th century by William Brewer.  An exceptionally wealthy man, he was granted the lordship of the manor by King John in 1201.  Built mainly of red sandstone from Wembdon, the property covered a nine-acre site.  Documents show that the complex included a dungeon, chapel, stables, bell tower and a watergate, which added to William Brewer’s wealth, as all shipping passing through had to pay him 10 per cent of all dues.

Castle Street, described by Pevsner as the finest example of a Georgian street in England, was built in the 1720s on a site once part of the castle, the houses being occupied by merchants who managed trade through the port.  House numbers 6, 8, 10 and 12 were used as a nursing home from 1920.  The Mary Stanley Nursing Home existed until the 1990s, so many local people still have memories of it, especially of its use as a maternity hospital.  Mary Stanley herself was one the ‘gentlewomen nurses’ in the Crimean War.  In the 1960s the street was used for the town scenes in the making of the film Tom Jones.

Arriving in King Square – also built on the site of the castle, but from 1807 – we were shown that many of the buildings were built using the stone from the demolished castle.  King Square is now the administrative centre of Bridgwater.  The square is peacefully impressive with a war memorial in the central gardens.  There is little through traffic in this part of Bridgwater, to the extent that it often comes as a surprise to people who had no idea the square was there, even though they thought they knew Bridgwater.

We next walked on to the docks.  Once an important port, in medieval times it was counted in the top ten of the country’s ports and earned the town considerable revenues from the 11th century onwards from the imposed water tolls.  Exports included wool, wheat, corn, beans and peas.  Imports included herring, but mainly consisted of wine from Bordeaux.  By 1330 the town had become a centre for victualling.  No ships now dock at Bridgwater and the berths and quays are owned by Sedgemoor District Council.

There is more to say about this part of Bridgwater, but by the time we got there it was extremely cold with a sharp wind and those of us who had not anticipated that were quietly freezing.  My hands
had to stay in my pockets, so I could write no longer.

However, this was only the first half of Chris Sidaway’s guided tour of Bridgwater – and we are very much looking forward to our next visit to this fascinating town for the second half!