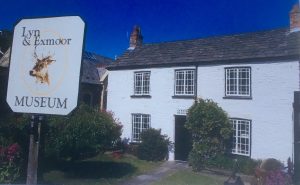 The Local History 2/Archaeology group trip in July 2019 proved fascinating.  First the Lyn and Exmoor Museum, then a guided tour to tell the story of the 1952 Lynmouth flood disaster.

The small Lyn and Exmoor Museum opened in 1962, transformed from a house built in the Napoleonic Wars from the spoils of the Battle of Cape Saint Vincent.  The roof itself is a rarity, being the original split stone roof tiles.  The modest museum is crammed with fascinating artefacts including household, farming, dentistry, fossils, local historical photographs and odd knickknacks.  Railway buffs would love the displays featuring the Lynton to Barnstaple Railway, 1895/1935.

I was interested to understand about the local fishing industry, now long gone.  Photographs showed nineteenth century oyster dredgers being towed behind small sail vessels.  As was the case at Porlock, the trade ended when larger vessels from Colchester and South Wales stripped the oyster beds clean in the 1900s.

The geology section tells the tale of local lead, iron and silver mining.  Calena is a lead ore containing silver mined at Combe Martin silver mine.  Siderite is the commonest local iron ore.  Well, I never knew that!

Agricultural exhibits included a pig salter trough carved from a solid trunk of elm when green.  This would take a whole pig, enough to last all winter.  I was told that elm is used because it ages to become impervious, so it’s also used for waterwheels.

The curator told the tale of the Devon fermentation press.  Apples or pears are fermented 7 to 10 days – ‘short and sweet’ or the longer the stronger – followed by storage in brandy casks.  According to legend, if a rat got in, the cider would become prized as vintage, because dead rat improved it immensely!  I’ll stick to wine, thank you.

I was also educated about whortleberry combs, collection boxes with four-inch tines on one side.  When you comb through the bush, the berries fall through the comb into the box.  During WW2, labourers and children collected 14 to 20 pounds a day of ‘worts’ at a shilling a pound.  Whortleberry and apple pie was a staple offering in teashops and I’m told it was most popular.

On to the guided walk!  Friday 15th August 1952 saw 34 dead and 31 properties and 19 harbour craft swept away with the Rhenish Tower, underground petrol tanks and a fuel station.  Some 28 bridges were beyond repair.  The year 1607 saw the previous flood, so people had built close to the river, thinking it was safe.

The tour began with an explanation of how the harbour has been vastly remodelled.  Some 20,000 tons of boulders had to be cleared from the confluence of the West Lyn and East Lyn rivers.  Between this confluence and the sea one sees today a wide flat grassy sward.  That is post 1952, part of the extensive flood prevention measures.  The footbridge by Rock House spans a void twice as wide as it was before the fatal flood.  Today one sees a circular support pillar under this bridge.  That marks the old width of the bridge.  Also, the stone wall that runs parallel to the original harbour wall was built after the flood to protect harbour craft and turn floodwater away from the harbour.  Upriver all ten houses at Middleham were washed clean away.  After the flood all that remained was a bedstead wrapped around a tree.

The current Lyndale car park is the site of maximum impact.  Here the water level rose sixty feet.  One witness saw the original telephone kiosk knocked clean over by the surging water.  The area ended thirty feet below the surface.  Rubble rose to the level of the second storey of the hotel here.  Where coaches currently park were houses in which complete families drowned.

Today’s bridges are higher than before, as the riverbed has been lowered.  YouTube has footage of bulldozers removing the 114,000 tons of rubble.  It took until 1959 to complete the work.

One can see today the water height mark on the front of the Post Office but that can only give you a sterile uninformed concept of these events.  Throughout our visit our guide – whose father had been one of the firemen involved in the rescue operation – truly brought to life the catastrophic events of that sad day.