On a dry but breezy September morning about 18 members met our guide, Neil Wilson, in his Radio Museum in the old Anchor Inn building on Anchor Street, Watchet. The museum was formerly located in the Tropiquaria compound alongside the BBC transmitter station and was known as Washford Radio Museum. 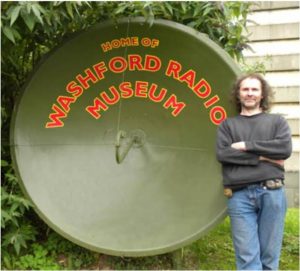 Neil gave us an overview of the history and contents, before summarising in understandable language various aspects of the development of radio broadcasting, and fielding the many questions we raised before allowing us to meander through the museum.

His interest in all things radio started in childhood and led to his training in electrical and electronic subjects. In 1993 he opened the Washford Radio Museum and his collecting began in earnest. Since then, by donations and purchase, he has accumulated a large quantity of hardware and ephemera. The objects include (but are not limited to!) transmission equipment, studio recording items, domestic receivers, military radios, books, magazines, records, recordings, radio scripts and diaries.

A few years ago there was a falling-out with Tropiquaria (not on the same wavelength? – sorry, Neil, that’s my feeble joke, not yours), so he decided to move into Watchet lock, stock and several tons of radio equipment. Part of his original museum is now set out in about a third of the ground floor and is open three days a week. The ultimate intention is to display on the whole ground floor plus in four rooms upstairs. In the meanwhile much of his collection is in storage in the old skittle alley at the rear of the building.

Neil gave us an outline history of the Washford BBC Radio Transmitting Station. It was completed in 1933 as a powerful medium wave transmitter for Wales and South West England. In the 1920s numerous weaker, local stations had been built but, in order to cater for the expanding wireless system, these were soon replaced by a smaller number of bigger transmitters. However, radio coverage for the West Country was soon found to be inadequate, while reception in Wales was excellent (something to do with the wetness of the Bristol Channel), so Washford became the Welsh Region transmitter. Neil’s prize exhibit is a large transmitter, rescued from a scrap dealer in the 1980s and similar to the original ones at Washford, where four such units consumed 300 kilowatts of power – that’s 300 single-bar electric fires to us people from the BBC Home Service era! These monsters needed round-the-clock attention and had technicians, riggers and caterers on continuous shifts. BBC Washford still transmits, and although nowadays the modern equipment is still big it is more energy efficient, more reliable and operated with fewer staff. The programmes are sent from studios around the country over telephone lines and wireless links before being blasted out to the world from the tall antenna array. 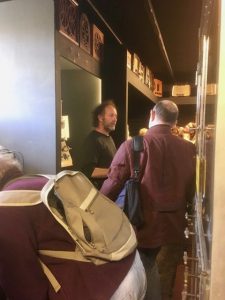 Neil responded to the numerous questions and nostalgic memories that our members raised. During WW2 the BBC transmitters were ‘synchronised’ with each other so that enemy bombers could not use individual transmitters as navigation aids. For the same reason, the one and only prewar TV transmitter was closed down for the duration. Neil outlined the importance of sound recording equipment – for example, to avoid the necessity for Australians to get up in the middle of the night in order to hear the BBC Empire Service – and its development from the 1930s to the present via techniques using wire, tape, disc, film and record.

We received a warm reception at Watchet Radio Museum. The visit was informative and, for most of us, nostalgic. The cry of “We had one like that!” was often heard. We look forward to a future visit when more of Neil’s vast collection is on display.