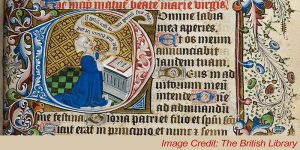 Books of Hours were prayer books for the laity designed for reading throughout the eight canonical hours of the day and night. Often described as the best-sellers of the Middle Ages, they were owned by a wide range of people, spanning the divides of age, gender and status. Part of their appeal were their often plentiful pictures, which could be opulent or modest depending on the owner’s budget.

These books could also be personalised with portraits, coats of arms and special prayers for their intended owner, and were sometimes furnished with added material such as poems, recipes, and memorials for loved ones. As a result, they give us a fascinating insight into medieval people’s daily lives and beliefs. This talk will explore a selection of beautiful and intriguing Books of Hours from the British Library’s outstanding collections.

The talk will be followed by a Q & A session where u3a members will have the opportunity to ask questions.