Awaiting the report. The Zoom meeting was recorded and is available to logged-in members here.

The Zoom meeting was recorded and is available to logged-in members here.

At the Speaker’s Morning on 17th March members heard a range of ‘Everyday stories of Exmoor folk’ from u3a members working on the Shared Learning Project, begun in late 2019 in conjunction with the Exmoor National Park Authority.  An archive of papers relating to the Knight Family of Exmoor was discovered in an attic. Our Project takes the documents, mostly letters but also account books, invoices, leases and so on, and turns them into script for modern computers, thus hopefully enabling future researchers to make more sense of the history of Exmoor. In the process we are learning an enormous range of interesting detail about life on 19th century Exmoor. 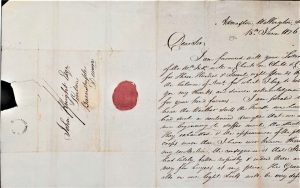 For the presentation, John Batt set the scene. John Knight was the millionaire ironmaster from Worcestershire who bought the Royal Forest in 1819 and began the ambitious programme of reclamation and conversion of the rough land into a ‘gentleman’s estate’. Catherine Knight told the meeting about transcribing the extensive ‘Exmoor Abstract, detailing the considerable monies that John Knight spent in 1819/1820 when first taking charge of the Forest. Under the heading of “Sundry Expenses” a peculiar item was found – the purchase of a coffin for the burial of one John King, and  whose body was carried from Simonsbath to Exford for burial. It was costly – paying for the shroud, the laying out,  the coffin, the carrying etc cost £6 12 shillings and 11 pennies – a large sum in 1820. The procession across the moor must have made for a sombre sight! This is an example of a ‘nugget’ of information which could do with more research in other sources to ‘fill out’ the story.

John Knight’s son, Frederic, switched to tenant farming and experimented with letting different sizes and compositions of farms and growing different crops and livestock. To assist, he employed a land agent, John Mogridge, between 1841 and 1848.  Kathy Barnes told the meeting about the Mogridge years. He negotiated leases with prospective tenant farmers, employed labourers to build cottages, fences, and dig out lime rock, and dealt with poachers, claims for deer damage, and a myriad of daily vexations.  He often expressed his frustration with a lack of communications with Frederic, who was often away in London being an M.P. and a ‘man about town’. Relationships with tenant farmers was often fraught, and one, a man called Hibberd, was a particular thorn. A typical comment is “I think Hibberd is the greatest rascal I have ever heard of”( John Mogridge, 6th April 1846).

Di Martin outlined the career of the next Knight agent on Exmoor, Robert Smith, who moved from Lincolnshire and farmed at Emmetts Grange for 20 years. He was agent between 1848 and 1861 and included an alas, very brief, allusion to visiting the Great Exhibition in London in 1851, about which he wrote that it surpassed “all I ever saw. No pen or tongue can describe the imposing effect”.  Cherrie Temple next told of the mining attempts on Exmoor, of which there were a number of shafts sunk, all of which eventually proved un-viable. Some document deal with family matters.  Hilary Fisk reported a particularly moving letter about the funeral of ‘young Freddy’, the son of Frederic, who died in 1879 at the age of 28. Frederic, his wife, Florence, and his son are buried at Simonsbath in the churchyard.

The Project has transcribed over 350 documents and there are a lot more stories which could be told. The work continues, and opportunity to become a transcriber, or to do related research, is open to members. For more info and contact details –  Hilary Fisk, Project Co-Ordinator – March 2022

February. Job of a laughtime, by Brad Ashton

Brad Ashton is an international TV comedy scriptwriter who has written over 1,000 television shows. He has supplied comedy for such star comedians as Tommy Cooper, Les Dawson, Dick Emery, Frankie Howerd, Bruce Forsyth, Ken Dodd, Hylda Baker, David Frost and Bob Monkhouse. Brad promises to keep us entertained with numerous amusing and amazing backstage stories about some of the performers he has had the pleasure of working with. He warns us to expect some startling revelations.

The Zoom meeting was recorded and is available to logged-in members here. 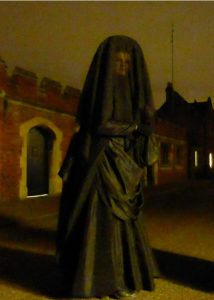 Before starting her presentation, Sarah Slater explained something of the nineteenth-century practices surrounding death, demonstrating for us the elegant Victorian mourning gown she was wearing for her talk. It was during the nineteenth century that a belief in ghosts intensified and public interest in spiritualism grew. Hampton Court Palace, imbued as it is with centuries of history, is of course a likely setting for many ghost stories. At night the Palace is very atmospheric, with a feel that is quite different from the one it has during the day.

From the 1760s, there have been ‘Grace and Favour’ apartments at the Palace – some 60–70 in all – with the largest having 46 rooms! Many of the occupants were elderly widows of courtiers and high-ranking officers, who were permitted to live there with their servants and families. We heard tales of ghosts and hauntings, including that of The Grey Lady, Dame Sibel Penn, who died of smallpox caught from Queen Elizabeth I, who luckily survived the disease. Apartment 39, in the wing where Sibel died, is now administrative offices and to this day staff report hearing footsteps approaching when there’s no one there. And the HR Manager says that one day, as she arrived early for work, she actually met The Grey Lady coming out of the apartment!

The most famous Palace ghost is that of Catherine Howard, the fifth wife of Henry VIII, who was Queen in 1540–1, before being beheaded. Henry had secretly left Hampton Court Palace during the night before her arrest. Believing him to be in the Chapel Royal, Catherine ran to beg mercy of the King, but of course to no avail. In the gallery outside the Chapel Royal, it is said, her ghost still screams at night. What is remarkable is that dogs don’t like to enter the gallery, and that some women faint where tests have shown there to be a ‘cold spot’. One day two women fainted on successive tours of the Palace at that place where Catherine turned and screamed on realising that the King had abandoned her to her deadly fate.