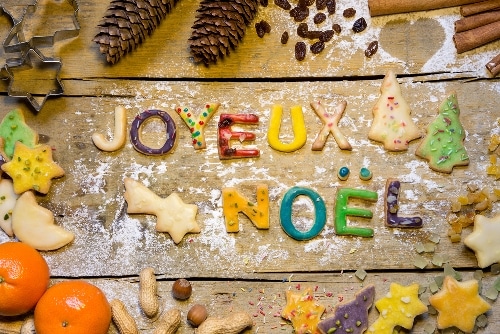 Christmas in France begins on Christmas Eve when many families go to Midnight Mass.  This is followed by a meal of many courses that can go on for hours – although nowadays this is often held over until Christmas Day itself.  Some traditional dishes that may be served at this meal – Le Réveillon – include oysters, snails, lobsters, roast capon, baked salmon, rabbit terrine, truffles, and garlic soup.  Christmas pudding is not a French habit, but different regions serve different biscuits, and a chocolate log, called la bûche de Noël, is popular.  In Provence, there is a tradition of serving 13 different desserts – the number 13 signifying Jesus and his 12 disciples.  Each dessert has to be sampled to ensure good luck the following year!  Of course, French wines and champagne are drunk.

Pére Noël is part of a French Christmas, and, in the East of France, he may be accompanied another figure – dressed all in black and carrying a whip.  This is Pére Fouettard and it is his job to chastise children, who have not been good!  On Christmas Eve, French children leave their shoes, filled with carrots, next to the fire.  The carrots are a gift to Pére Noël’s donkey Gui (French for mistletoe).  In return, Pére Noël fills the empty shoes with small gifts.  In some regions, food and drink are also left out – a gift for Mary and Jesus if they should pass by.

House decorations often include a nativity scene. In addition to the more usual figures of Mary, Joseph, Wise Men, etc., the French add local tradespeople such as a butcher, a baker, a policeman, and a priest.  A very traditional addition is le ravi – the delighted one – a person with his or her arms raised to express delight at the birth of Jesus.  Such figures are on sale at markets all over France.  There is an especially famous market in Strasbourg: 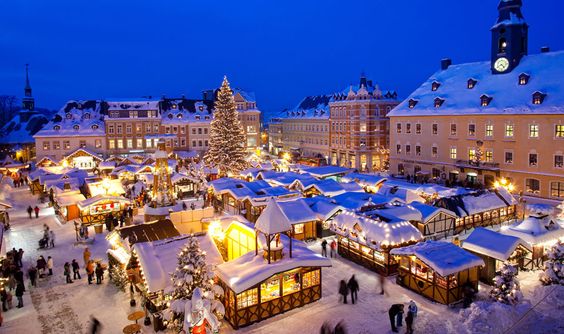 For house decorations, the red poinsettia – called une étoile de Noël – is much prized.  Mistletoe is used to bring good luck but- be warned – it’s not associated with kissing!  On the dining-table three candle-sticks are used to signify The Trinity and – harking back to even earlier beliefs – the ends of the table-cloth might be knotted to stop the devil getting under the table!