I’ve decided to start week 19 with a word of warning to anyone who’s been following my walks through my notes.  I’ve been asked, via a third party, if I will carry on with my walks and writings when we get back to ‘normal’, whatever and whenever that may be.  My answer is that I will probably carry on doing a regular exercise walk but it probably won’t be a daily walk and it probably won’t be the same walk each time.  I certainly will not carry on writing these notes.  There are times when I find the writing very difficult.

On Monday of week 19, which was another wet leg walk, I was delighted to see the thrush scavenging beside the path.  I didn’t get a good look at it as it scurried into the undergrowth as soon as it sensed my presence. 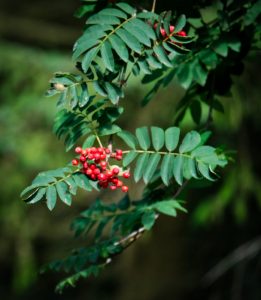 There are very few wild flowers blooming at the moment so I’ve been concentrating on looking at the trees again.  The time of ‘mellow fruitfulness’ is approaching with the first elderberries turning purple, rowan / mountain ash berries and haws starting to turn red and the seeds of the sycamore and elm trees getting fatter in readiness to fly away.  In the hedge that was cut in week 8, the sloes are now big and purple where they are in the sun but the berries are still small and green on the blackthorn bushes in the shade in the valley.  I am disappointed with myself for not seeing that there are sweet chestnut trees growing amongst the horse chestnuts.  It’s only now that the sweet chestnut catkins are littering the path that I have looked up and noticed the different leaves.  I thought that I was being more observant than that.  The brown patches on the horse chestnut trees continue to become larger and more numerous and on the worst affected tree, the leaves on one complete branch are brown and shrivelled.  At least there are still some spiky conker cases getting larger on the trees.  On Wednesday, I came across a family of young blackbirds and further along the path, Mr Blackbird was gorging himself on ripe blackberries.  I’ve found another patch of black horehound and various varieties of thistle are opening their mauve flowers. The thistles are mostly too far away for me to identify them and I’m not very good at thistle identification anyway.  On Friday, I went round my walk in the opposite direction and was surprised how different things looked – I might try it again occasionally.  The rooks are silent in their rookery but are busy feeding in the fields at the farm. 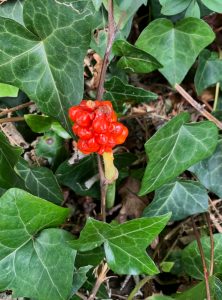 During week 20, I’ve regularly seen the blackbird family.  The juveniles are now flying well but are still begging their parents for food even though I’m certain that they are capable of finding their own – all kids will accept a free meal if they can get away with it!  Most of the cuckoo pint / arum / lords and ladies spikes are now a vibrant red and add a brilliant splash of colour to the predominantly green undergrowth.

I’ve noticed clumps of red clover appearing in a field that was cut for hay a few weeks ago.  The swathe of grass along the path fence in the same field is now polka-dotted with the pink and white flowers of small bindweed.  Probably not what the farmer wanted!  Nearby on the ‘verge’, the flowers of the small bindweed are all pure white even though they are next to a patch of pink and white striped flowers.  Do they change from one to the other or are they just different?  I’ll have to watch and see what happens.  The first flowers of the traveller’s joy / old man’s beard are dying back to be replaced by the seed heads.  I can’t wait until they get ripe and fluffy, they look so pretty. 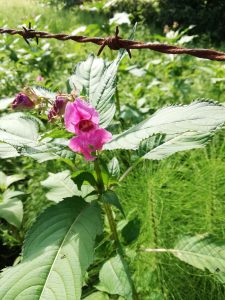 Elsewhere, in the hedge that was cut in week 14, traveller’s joy is now festooning the hedge with its cream flowers, so nature does recover if given the chance.  My eye was caught on Saturday by a sight I didn’t want to see – the lovely pink of the flowers of Himalayan balsam.  It’s only a small patch at the moment but it’s certainly something we don’t want to spread.