After the early morning rain on Monday of week 21, it was a wet legs walk but that was compensated for by the vibrancy of the colours where the leaves, flowers and countryside had been washed clean.  On Wednesday, a flock of sparrows was feasting on the ripe elderberries, they didn’t even stop eating when I walked under the tree.  There have been small, subtle changes along my route but nothing of significance.  However, I have a confession to make – for the 1st time in more than 20 weeks, I missed my morning walk on Thursday.  It was either miss my walk or catch the 8.15 bus from Watchet so that I could ‘attend’ the U3A AGM – the AGM won.  Friday morning saw a major change – the hedges and grass ‘verges’ beside most of the paths had been cut again.  This time I wasn’t sad because it’s the right time of year for such work.  I will miss watching the white and pink and white striped small bindweed to see if they change colour as they open and close.  At the weekend, I was delighted that the long grasses on the ‘verges’ had been cut, it meant dry legs walks.

What a difference a day makes.  It is Monday of week 22 and the sun is shining, the sky is blue and dotted with pretty, white fluffy clouds.  It made me feel happy to be alive.  There was no early morning walk on Tuesday.  It was the 8.15 bus to Minehead again which will probably be a weekly occurrence from now on.  How resilient nature is – I’ve notice that the small bindweed, both white and pink and white striped, is already flowering where it was cut back last week.  Wednesday was a very unpleasant morning with heavy rain but by Thursday the sun was shining, the sky was blue and the path was littered with leaves and small twigs brought down by the rain.  Friday was very windy with sunshine and showers and, luckily, I missed the worst of the rain.  The overnight wind had brought down many more leaves, twigs and lots of unripe conkers.  How changeable and fickle our weather is!  I was made to feel that autumn is just around the corner when I saw boxes of help-yourself windfall apples by gates on Friday.

The weather has continued to be very changeable during week 23 with Storm Francis doing its worst on Tuesday.  Afterwards some substantial branches littered the side of the path together with even more twigs, leaves and unripe conkers.  In the gardens along my route, a fence blew down, rows of runner beans were flattened and sunflowers no longer hold their heads up high.  Boxes of help-yourself windfall apples had multiplied too.  More than once, I’ve watched a grey squirrel scampering along the top of a wall with a conker in its mouth.  During the week, the traveller’s joy / old man’s beard alternated between looking totally bedraggled and being light and fluffy.  One sunny morning, I noticed a patch of scarlet hips high above the hedge where the wild roses had previously cheered me with their flowers.  The ivy flowers are beginning to open and will soon be swarming with insects.  I’ve seen one young blackbird trying to navigate the thorns on the blackthorn bushes but there was no sign of its parents.  Many of the horse chestnut trees are looking very unhealthy with more and more of their leaves curling up as they turn brown. I hope they recover next year. 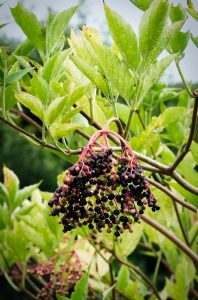 What a difference a week makes! Tuesday of week 24 was one of those bright, sunny, crisp autumnal mornings when I could happily have walked for miles.  The sun on the haws made them glisten their brilliant red.  The creamy green fluffy seed heads of the old man’s beard climbing through the elder tree contrasted beautifully with the deep purple of the elderberries and the sloes are now plump and ripe.  On dry mornings, I’m regularly serenaded by a flock of small birds twittering away in the blackthorn bushes.  I can hear them, I can occasionally see the branches moving, but can I see the birds to identify them? – no, I can not.  It’s so frustrating and makes me wish that I was better at identifying birds by their song.  Towards the end of the week, I noticed that the yellow wood avens / herb bennet, buttercups and dandelions, self-heal and the small bindweed on one of the grass ‘verges’ that was recently cut have started flowering again.  Nature rejuvenates itself so readily when we let it, my love of watching nature has increased over the past months while I’ve been doing my morning walk.  Some blue speedwell has appeared in the same ‘verge’ and I have no memory of seeing it there before.  I always associate all these flowers with spring / early summer and not September – I’m learning so much about nature from my walks.

Any pictures that accompany this have been taken, at different times and in different places, by Cherrie Temple.  Thank you, Cherrie.

Back to Part 10  |   Full Gallery for Catherine’s amble