On Monday of week 8, I had a very windy morning walk with the path strewn with twigs, leaves and tree flower ‘confetti’, mainly pale green and white from the sycamores and horse chestnuts.  Apart from the rooks, who were as noisy as ever, the lack of bird song was noticeable.  Wednesday was a sad walk, the hedge beside part of my walk has been cut – I just hope that none of the nests in the hedge have been disturbed.  They’ve also cut the “verges” along the paths so all the grasses that I’d been admiring and all the wildflowers have disappeared before they could set seed.  One good thing, I won’t get wet legs from the alexanders and cow parsley next time it rains.  I’m only joking as I’d rather have wet legs than cut ‘verges’.  A kestrel was hovering over the cemetery with eyes on its breakfast and the blackcaps were singing their hearts out.  I’m now able to identify their song but, like other birds, they are rarely visible now that the trees are in full leaf.  Ribwort and another, as yet unidentified, plantain are pushing through the long grass that hasn’t been cut and the bank next to the primroses is covered in the bright blue of speedwell.  The lambs and their mothers are back in the field but there’s no more frolicking, just eating, more eating and getting bigger.  I realised towards the end of the week that I’ve been missing something – every day in the same place I’d seen the same very distinctive blackbird, it had a large white patch on each wing, and now it’s gone.

Nature never fail to intrigue me when I allow it to.

It’s now the beginning of week 9 and ever since the hedges and ‘verges’ were cut last week, I’ve been very disheartened on my walk and have wondered whether to continue.  On Tuesday afternoon, a fellow Nature Ambler came to Watchet and we did the walk together, socially distanced of course.  That gave me a renewed love for the walk and made me see it through different eyes.  No longer do I concentrate on the destroyed ‘verges’ but now look beyond the fences.  It’s surprising what I’ve noticed. 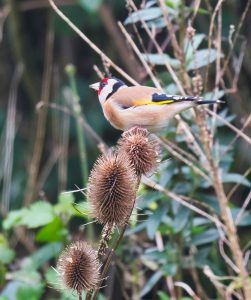 On Sunday, I saw fledgling goldfinches on the telephone wires and fledgling bluetits doing some unsteady landings.  The rooks have increased in number so some must be youngsters, although I can’t tell which are which.  They continue to be very noisy and drown out much of the other bird song.  On Tuesday, we discovered that the speedwell on the bank isn’t all the same colour – some is the bright blue I’m used to while some is a very pale, delicate shade of blue.  We found the first tiny sloes on the blackthorns and the ‘dangly earring’ flowers of the (maybe) poplar tree have littered the ground below with tiny balls of white ‘cotton wool’.  If anyone can identify the tree from my description, please let the Convenor know.  Red and white clover is in full bloom in the fields and one brilliant red field poppy is clinging to a wall top near the Church.  Some of the early flowers on the hawthorn and elder have faded but others have opened in their place.  I realise that there have always been white flowers on a tree or a shrub since I started doing this walk.  I had hoped that the forecast rain for early Friday morning would freshen everywhere but we had so little that I saw no difference.  However, Saturday morning saw me getting a little damp.  I left the house in brilliant sunshine, saw grey clouds over the Brendons and was caught out by the shower that dumped its rain on Watchet.  Luckily, the leaves on the trees protected me from the worst of it.