Week 10 has seen the ‘verges’ start to come back to life again.  Along the edges, I’ve seen buttercups, wood avens / herb bennet, spotted medick and self-heal making a tentative reappearance.  I regularly disturb a flock of happy sparrows as they forage on the ‘verge’ for grass seeds.  In the shade, the Hart’s Tongue ferns have finished uncurling their fronds and are now a beautiful shiny green.  The flowers of the blackberries / brambles and wild roses have started to open, both with colours ranging from white to deep pink. 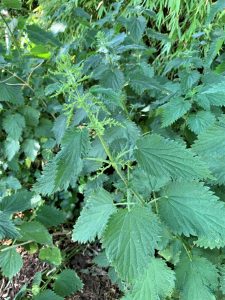 Stinging nettle flowers have been opening for a while.  I never realised what a pretty shape they are or how their colour changes through time – they start off a gorgeous grey-green then slowly change to green before turning a pretty yellowish-green.

The single poppy on the wall has become a vibrant splash of red as more flowers open.  On the same wall, I’ve been watching a plant grow for a few weeks.  I had no idea what it was – could it be a herb or some other garden escapee?, I asked myself.  It’s now in flower and the answer is ‘no’.  After looking it up in reference books and checking with friends, I believe it is black horehound.  Another riddle has been solved this week.  Two different climbers have been putting out tendrils that have been getting longer and longer.  One has now opened its tiny, delicate pale green flowers so that I can identify it as black bryony, the other is, as yet, unidentifiable.  Near the hedges that were trimmed, I’ve seen fledgling blackbirds and fledgling sparrows so, hopefully, the nests weren’t disturbed.  One day, I had to slow my walk as two young goldfinches were busily feeding beside the path.  When they sensed my presence, they tried to ‘hide’ by clinging to the wall then one tried, and failed, to cling to a dandelion stem before both saw sense and flew into a tree – it was hilarious.  I’ve seen house martins in the skies above town and the swifts are still very much in evidence.  I wonder what changes and surprises week 11 will bring.

The unseasonable hot, sunny and dry weather continues into week 11.  Where the ground is visible in the fields, it is as dry as dust and great cracks are appearing.  I’ve noticed that many flowers open and then die back much more quickly than I would expect – a sign of the long, hot, dry period.  The heat is bringing out the butterflies early in the mornings.  On Monday and again on Tuesday, I saw a ‘brown’ butterfly skimming over the long grass in the field – it was too far away and moved too fast for me to identify it.  The hot weather is magnifying the scents, both good and bad!  I walk under a white canopy of elder trees, the scent of the flowers in full bloom is almost overpoweringly strong.  It reminds me of my childhood when we made elderflower ‘champagne’ to drink while playing outdoor badminton.  I had expected to wake up to a wet world on Wednesday, instead it was overcast and dry. 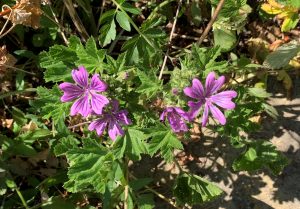 By Thursday, the world had been washed clean and the leaves on the hedges and trees and the grasses looked greener and brighter.  The air felt fresh and white clouds adorned the clear blue sky.  The small bindweed, both the pure white and pink & white striped flowered varieties, the white flowered larger bindweed and the common mallow are opening more flowers now that they’ve had a drink.

The high winds of Thursday and Friday brought down many leaves and flowers, including what looked like white laburnum flowers.  Armed with my reference book, I think I have identified it as a False Acacia / Locust Tree.  On Saturday, I was very upset and for the first time since lockdown started, the sights and sounds of nature weren’t enough to lift my spirits.  Even my first sighting of the thrush that I’d heard so much about couldn’t bring a smile to my face