Monday of week 12 was a real birdy walk.  First it was young sparrows in and out of the hedge that had been cut, so at least one nest survived, then it was 5 very large, dark-coloured, birds with long legs behind them soaring high in the sky – herons or dare I even suggest cranes?  If anyone has seen this quintet and can positively identify them, please let the Birdwatching Convenor know.  The kestrel was looking for its breakfast over the cemetery again and 3 very young wrens were trying, and failing, to land gracefully.  Further on, a flock of long-tailed tits were chattering noisily in the blackthorns and above me the swifts were swooping and gliding.  Every day since Tuesday, I’ve set off with binoculars round my neck but no big birds have I seen.  However, a beautiful red admiral butterfly was sunning itself on a hedge on Tuesday morning.

I’ve been watching the sycamore flowers slowly change into seed wings – some bunches are still flowers only, some have seed wings at the top and flowers at the bottom while others are seed wings only.  Why have I never noticed this before?  The horse chestnuts are changing again with the conkers swelling in their prickly cases and nasty looking brown patches appearing on the leaves.  After wind and heavy rain in the evening and overnight on Wednesday, Thursday morning saw the path littered with baby conker cases, wild cherries and sycamore seed wings.  Subsequent wind and heavy rain have brought even more greenery down onto the path.  Most of the early flowers have faded but a ‘hedge’ of guelder rose has opened and I’ve spied a woody nightshade plant and a stinking iris has suddenly appeared. 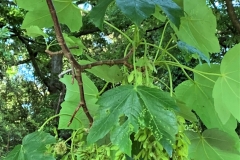 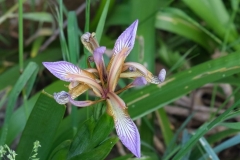 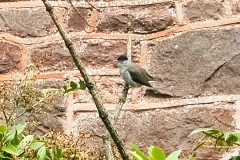 On Monday morning of week 13, I saw an even more fleeting view of the ‘big’ birds.  They were flying away from me towards Minehead with long, slow wing beats.  There was a lot of happy bird song on Tuesday with me identifying goldfinches, blackbirds, robins, wrens, sparrows, blackcaps and, of course the rooks and gulls.

By contrast the dull and humid conditions on Wednesday meant almost silence – what a difference.  Thursday morning saw me debating with myself – should I go for my walk or shouldn’t I?  Light rain was falling,
the sky was leaden and the forecast was for more rain so I decided to brave the elements.  I was surprised how soothing I found the gentle patter of rain on my hood.  It was wet again on Friday and I marvelled at how different grasses coped with the rain.  Some held their heads high with droplets of water clinging to them while others looked sad and bedraggled.  By Saturday, the grasses had dried with some standing proud and some still looking worse for wear.  The alexanders haven’t coped well with the rains, their leaves now black and rotting.  The cloud formations that morning were spectacular with every conceivable shade of grey and over towards Hinkley, a shaft of sunlight slashed through the clouds to alight on the water – what a beautiful sight to behold.

Week 14 has been a week with nothing much new to report on.  Or is that, in itself, worth reporting?  The mallow adds a splash of pink to the wayside, the ivy-leaved toadflax still clings to the wall displaying its little mauve flowers, I’ve found more clumps of black horehound and a patch of spotted medick is in full bloom again.  There are some marvellous thistles flowering on the railway bank and the buddleia is starting to open its mauve flowers.  I thought that all the white flowers had, at last, gone from the trees until I found another elder tree covered in white.  On Friday and Saturday, the rooks were sitting on sentry duty on the power lines by the farm, no social distancing for them!  They make quite a racket when I walk past and disturb them.  Saturday was another sad walk – someone had cut the banks of the lane up to the Church.  I’ve been watching a very fine specimen of a burdock plant start to open its mauve flowers and now its been chopped down before reaching its prime.  Why, oh why do they do it?  A group of teasels are putting up their flower spikes and, hopefully, their location is safe from destruction.  The change in the weather has been most refreshing.  I did not cope well with the high temperatures on Wednesday and Thursday.

I’ve been watching the changes to the horse chestnut trees again and I don’t like what I’m seeing.  The brown patches that I first noticed in week 12 are getting larger, more numerous and are spreading to more trees.  Some of the patchy leaves are beginning to curl.  What is causing this?  Could it be the very hot, dry weather we’ve had or is it some kind of disease?  I can’t see any insect infestation.  I’ll keep monitoring the situation.  In the meantime, if anyone knows the answer please let the Nature Amblers Convenor know.  I keep looking carefully at other species of trees and so far the only brown patches I can see are on horse chestnuts.  However, some of the sloes are developing a brownish ‘fur’ on them.