Week 15 has started on a happy note.  Joy oh joy, I found a young burdock plant poking its nose out of the hedge near where the mature plant was chopped down, and another young plant on the opposite side of the lane.  The sorrel is showing as a red haze across the top of the long grasses and other plants in the ‘horse’ field (currently horseless!).  I wish I could get a better look at what else is in that field.  The second climber that I couldn’t identify in week 10 has now started to open its pale creamy white flowers, and I can see that it is old man’s beard (or traveller’s joy).  It will make a spectacular display when the flowers are fully open and then later when the fluffy seed heads form.  I wonder if I’ll still be doing my daily walk then – time will tell.  The arum (or lords-and-ladies or cuckoo pint) flowers have long since faded, and the berries are swelling, but are still green.  I love their splash of colour when they turn to orangey red. 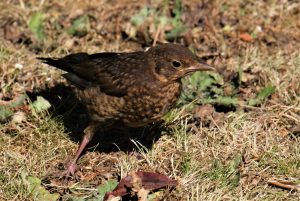 On Thursday, I came across another family of young blackbirds and had a very fleeting glimpse of a family of green woodpeckers.  I had been warned by a fellow early morning walker that they were about, otherwise I would have missed them.  Unfortunately, much of the bird song is being drowned out by the increase in traffic, even at 8 o’clock in the morning.

They’ve been at it again!  Friday morning saw the bottom of the ‘primrose bank’ cut, but why?  It’s probably the widest path on my route.  Luckily all the flowers should have seeded by now.  I heard the distinctive tap-tap-tap of a woodpecker on Saturday.  It was very near to me, but I had little hope of seeing it, as the trees are behind an eight-foot high stone wall.

I had fun watching the rooks on Monday morning of week 16.  They were having to do aerial acrobatics to counteract the very strong winds.  Wednesday was grey and dismal, with light drizzle falling – not pleasant! and I had to negotiate an obstacle course – a large branch had fallen across the path.  In view of the speed with which they cut ‘verges’, I wonder how long it will take them to remove this obstacle.  By Thursday, the branch had been thrown over the five-foot high mesh fence by the path, which couldn’t have been an easy task. 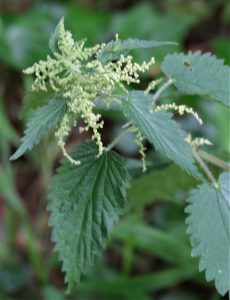 The stinging nettles continue to flower, I’d never realised that they had such a long flowering season.  It’s surprising what you see when you really look!  The grass ‘verges’ that were cut in week eight are now showing colour again with yellow buttercups, dandelions and wood avens (or herb bennet), blue speedwell and pink herb robert.  The thistles on the railway bank are now setting seed and the flower heads are covered in ‘fluff’.  The blackberries are still flowering in their wide range of colours from white to deep pink.  I’ve seen my first black blackberry and it looks as though it will be a good crop this year.  What a contrast it was on Saturday – the sun shining brightly from a clear blue sky with a few fluffy white clouds and a white half-moon.  A few goldfinches were happily singing on the power lines near the church – what a joy to listen to.  The sunny weekend has seen a variety of ‘little brown’ butterflies fluttering around in the hedgerows.  I’m not very good at identifying butterflies at the best of times and when they’re moving so quickly, I’ve no chance. 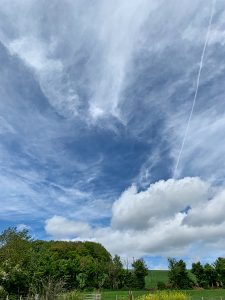 For the first time in 16 weeks, the sky was criss-crossed with white vapour trails on Sunday morning – some people are braver than I am.  So far, I’ve ventured to Minehead on the bus 3 times in 16 weeks, it’s usually 3 times in one week