Members managed to see 70 different bird species this month – these are included in our list of 2020 summary of sightings as are the other sightings for each month during 2020.  The end of year total of different birds seen in 2020 is 131.

If anyone is interested, during lockdown I shall be including a quick note of the route of some of the walks I do, and what I have seen on those walks.  These will be posted on the Bird Watching forum.

November.  A total of 72 different species were seen during November by our members.

A female Black Redstart was seen in Minehead.   The first winter thrushes have arrived, with sightings on North Hill and in members’ gardens – both Fieldfares and Redwings being seen locally.  A couple of Turnstones were spotted at Dunster beach along with the usual ducks (around 200 Wigeon), gulls etc.

Do keep your sighting coming in.  If there is anything exciting it can be posted on the Bird Watching Group’s forum.  Make sure you tick the box to receive notice of new sightings as they are posted.

October.  A total of 68 bird species were seen this month.  This included the highlight of a Red-necked Phalarope, I understand it is the first sighting in Somerset for 5 years and it decided to come to Pyles Mill (off A39 near Allerford).  Pleased that several members of the bird watching group were able to see it.  This is an unusual bird in that the male incubates and feeds the chicks and the female finds another mate, again leaving him to incubate and feed the young.  Once there are no more breeding opportunities she will migrate leaving the males and young to follow when the young are sufficiently capable.  Sounds good to me!

September.  For those not able to get out and about, this is a quiet time of year in our gardens.  I was lucky enough to be able to have a trip to Steart and much to my delight saw 2 juvenile Black Winged Stilts.  This is the first time they have bred there and my visit was after they had started to fly so they were much closer at times, than when at their original nest site.

Cherrie Temple tells me about several hundred Canada Geese flying over her property.

Let me know if you hear of or see any interesting birds.

August.  It has been a fairly quiet month for the Bird Watching Group, however some of us are still getting our daily exercise at the same time.

One member had seen or heard 44 different species in the month with 18 of those seen or heard from his garden.  While another member adds a Common Gull to their year list.

Bats, rabbits and a lizard were also mentioned. 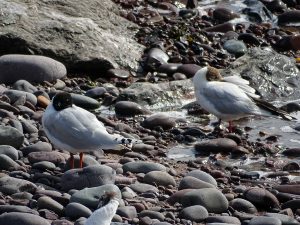 July.  Members continue to send news of the birds they have seen during the month.  Highlights included the Mediterranean Gull in Minehead Bay (see right).   Steart had some surprises with Little Ringed Plover, Sedge Warbler, Curlew Sandpiper and one of our favourites the Avocets with their young.  Also seen at Steart was the Black Winged Stilt, I understand this is the first time they have bred there.

Of course the antics of the young birds learning to feed themselves from our bird tables and other feeders also causes much amusement.

June.  Reports came in from Minehead, Sampford Brett and Watchet and, in addition, some members made the most of a little more freedom to visit birding spots nearby.  There was a total of 71 bird species seen plus two others heard.  Highlights included the common crane, Dartford warbler, little ringed plover, redpoll, and yellow wagtail – although, to be honest, every species is a highlight in its own right – even the starling!  Group members, and indeed those U3A members not in the birdwatching group, are encouraged to send their July sightings to Kay, both during and at the end of the month.

May.  Although we are not meeting as a group at the moment, members of the group are sending their sightings for the month from their gardens and from their regular exercise walks. Reports for May came in from the Minehead, Dunster, Blue Anchor, Horner, Sampford Brett, Webbers Post and Watchet areas.  There was a total of 55 bird species seen during the month plus three others heard.  A list of those birds and other notes of interest have been circulated to members of the group by email.  Sightings ranged from large buzzards to small goldcrests, with a few specials like Dartford warbler, pied flycatcher and cuckoo as well.

April.  Reports have come in mainly from the Minehead area, but there were some from around Watchet and nearby.  Our sightings totalled 51 bird species seen plus 7 others heard.  This includes young robins and blackbirds feeding unfledged young as well.  A ring ouzel was seen at the very end of March, and highlights in April included lesser redpoll, Dartford warbler, and red kite – plus a cuckoo heard on North Hill.

March.  Covid caught us on the hop – meeting cancelled and no alternative arranged.

February.  The February meeting was at Ham Wall, where we saw a total of 43 different species, including kingfishers, marsh harriers, and both pintail and pochard ducks; and we heard a further four.  Although we did not see a bittern, we did hear them booming – a wonderful sound!

January.  To Greylake and then Ham Wall for the starling murmurations.  A total of 26 species were seen with two more that we only heard.  Unusually, the murmuration took place at Shapwick, and although it was some distance away, we did see all the large groups join together to form a huge murmuration, so saw some wonderful displays.