The Knight Family Archives documents have revealed glimpses into the working lives of mid-Victorian Exmoor farmers.  By 1867, Frederick Winn Knight had been farming on Exmoor for 40 years. F W Knight was the son of John Knight, who bought the forest of Exmoor land from the Crown in 1820.  (His father had left him in charge when he went to live in Rome in 1837).

Farming practices evolved on Exmoor throughout the period, but some factors remained, and remain to this day, a constant.  Recent letters the Project has transcribed illustrate this basic fact of life.

In a letter dated the 16th January 1867, William Scott, the shepherd, reported to his employer:

“we have a great deal of snow up hear [here] at present it fell last Saturday”, but he went on:

“…our sheep has plenty of meat as yet and we are doing very well our hogs cane [can] get no turnips but i am giving them hay and leting [letting] them run of into one of the fields and they cane [can] pick a good deal of meat in the field through the day, and came in at night and eat hay”

[The project team learnt that ‘hogs’ are sheep of a certain age.  ‘Meat’ is clearly used in a general way to mean ‘food’.] 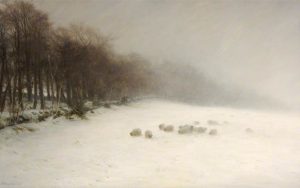 This painting, by Joseph Farquharson, painted around 1900, conveys the cold, damp air of those wintry days perfectly.

“we have had about a week of very trying weather for lambs.  it has Bean (sic) a very hard frost with very high winds, it has cut the ‘——‘ (? grass) very much”

And even in April, when the agent, Fred Smythe, visited the farm

“I went over to day … the fog was so thick I could not see much about it. Scott informs me the lambs are coming on fast with very good luck so far, I cannot think how the Shepherds manage to see them in such a day as we have had, Scott says it is very bad”

William Scott hailed from Scotland, and can be assumed to have known bad weather.  “Scott says it is very bad” therefore must be taken to have indicated some extreme conditions. 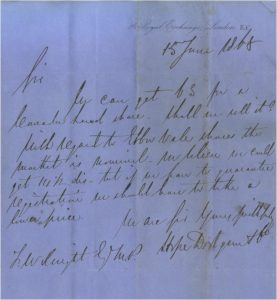 An example letter from 1868

The small team transcribing the Knight Family documents is thoroughly caught up now in teasing out the detail of  life on Exmoor – for the Knights, and their workers and the professionals such as lawyers and surveyors who worked with them.  More insights will come as the work proceeds.

2 thoughts on “Winter on Exmoor”