December.   The Birdwatching Group visited Steart on a windy day – it was not good bird watching weather hence a rather short list of 28 species seen plus 4 heard only.  We witnessed a large murmuration of Lapwings and a large flock of Golden Plover.

November.  Our November meeting was to Shapwick Heath and Ham Wall.  We saw a good total of 42 species plus two that we only heard.  In a way, our highlight was a white stork – although later we discovered that she was Daisy, an escapee!  A good sighting, nevertheless.

October.  Bowling Green Marshes where, although there was a slight drizzle, we identified 35 species of birds as well as two more elusive ones that we only heard.  The highlight was probably more than 100 avocets on the estuary.

September.  Our visit was to Steart.  September can be a difficult time of year to see a good number of species as many summer visitors have left and winter arrivals are on their way.  A total of 25 bird species were seen.

August.  The proposed outing to Chetsford in August was changed to North Hill following an uneventful recce to Chetsford.  We had an enjoyable walks through both moor and woodland and saw 22 different species of bird.

July.  Our meeting was planned to North Hill to hear and hopefully see the Nightjars.  Sadly the evening was not considered suitable so the outing was cancelled

June.  We visited Tarr Steps – it was a lovely day for bird watching and we saw or heard a total of 26 birds, including a long view of a Dipper and a family of Grey Wagtails.

May.  In May we travelled around the Horner area, visiting Horner, Webbers Post and Bossington.  We saw 17 birds and heard another 8.  We heard and saw a lovely Wood Warbler, his body trembling with the effort of his song, sadly there were no sightings of Pied Flycatchers.  It was a good meeting in that we helped each other when identifying the bird songs, following in the spirit of the U3A of sharing knowledge.

April.  This was our trip to Swell Wood.  We had a good day with 31 species seen and a further 9 heard.  As well as visiting the Heronry we also were searching for the recently re-introduced Cranes and were lucky enough to have several sightings and were all able to have good views through the telescopes.

March.  Our March meeting was to Ham Wall.  We had a good day with 43 different species being seen.  The highlights were hearing the Bitterns Booming and a pair of Garganey Ducks were also seen with excellent views of the drake showing his distinctive heavy eye stripe.

February.  Our February meeting was a cruise on the River Exe where, between us, we saw 37 species of birds, including large numbers of Brent Geese. 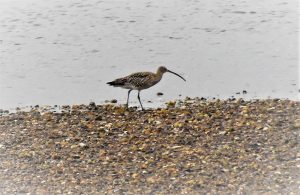 January.  A visit to Steart.  We saw a total of 42 bird species and were very lucky with the raptors, seeing a female Hen Harrier (also known as a Ring-tail due to the white rump) and a Short Eared Owl.