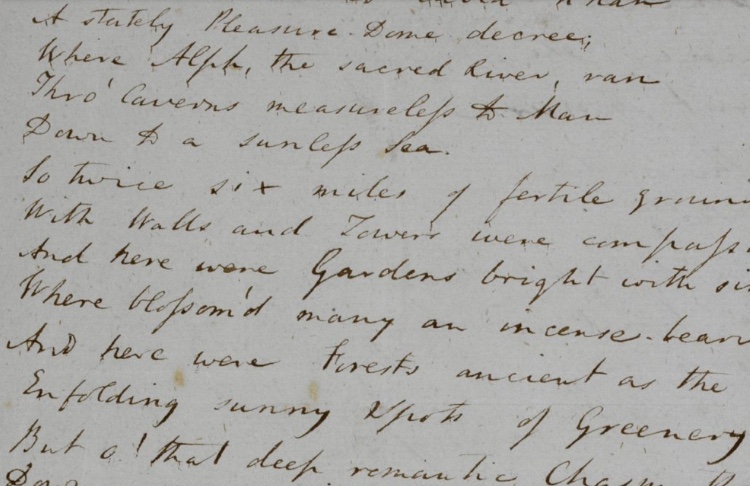 This spring the British Library is lending the unique manuscript of Samuel Taylor Coleridge’s extraordinary poem ‘Kubla Khan to the Museum of Somerset.  The loan is part of the British Library’s ‘Treasures on Tour’ programme, which is generously supported by the Helen Hamlyn Trust.

The exhibition celebrates the display of the manuscript in the county where the poem was written in a lonely farmhouse at Culbone in 1797. Coleridge said he imagined the poem in “a sort of Reverie brought on by two grains of Opium”. But before he had finished writing it down he was interrupted by the Person from Porlock, and left ‘Kubla Khan’ as the most famous of all unfinished poems. Its evocation of Xanadu and of ‘caverns measureless to man’ has been an inspiration for artists, writers and musicians ever since. Also on display, courtesy of the British Library, is the first edition of ‘Lyrical Ballads’ by William Wordsworth and Coleridge. The exhibition will tell the story of the time Coleridge spent living in and near the Quantock Hills, from 1797 to 1799, his relationship with William and Dorothy Wordsworth, and the legacy of his writing.

What’s On – The Museum of Somerset (swheritage.org.uk)